Masons, and Boswells, and Wisteria...Oh My!

I truly hope you weren't expecting some big year end Christmas-y type of post, because I don't have one. Sorry. To be honest, the holiday of Christmas is rather difficult to write about when it comes to this aspect of the hobby. I think in the past I've mined out as much as I can. But, I do have a cool something-or-other to talk about, so let's get to it.

I have a friend in the Sherlock Holmes world who has almost no interest in the chronological part of all of this. He does, however, have a story that he gives a date to, and he has a very good reason for doing so. (I'll get to why I'm bringing this up soon.) Bill Mason is a Tennessee Sherlockian. He is a fun guy to hang out with, and listening to him speak is always a joy given that Southern drawl he has. (He says everyone else talks weird, not him.) He will never use PowerPoint, and has no social media presence, but he's well-known in the hobby, and it's always a pleasure to be around him. 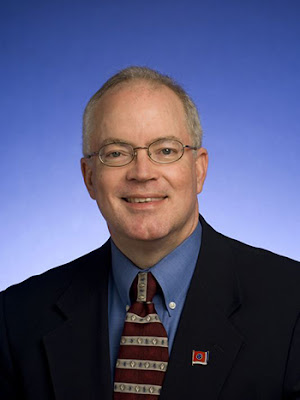 Bill told me once (on here) that he believes that 'The Retired Colourman' (RETI) started on Sunday, July 17, 1898. He has a lot of company in that area of dates as most chronologists like that summer. But, Bill's date stands alone. His reason? It's a good one, and makes sense. His thinking turns around this sentence from Holmes:
"Let us escape from this weary workaday world by the side door of music. Carina sings to-night at the Albert Hall, and we still have time to dress, dine, and enjoy." 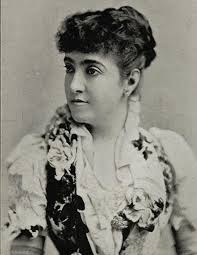 What follows is a small excerpt from an as-yet-to-be-published paper, and so I will offer nothing more from it. The Adelina Patti references are a very important part of said paper, and it just so happens a date that was a big one in her personal history gave Bill all the proof he needed to date RETI the way he did. The paragraph below is all you get of the paper, but understand that's it only a happy little side trip in the main theme of the piece. Bill says:
"Carina" is an Italian term of endearment and a female adjective. Adelina Patti was Italian by birth. Only a renowned performer would be singing at Royal Albert Hall. As one of the greatest singers of the time, she sang there frequently from 1886 until she gave her final public performance there in 1914. Most importantly, the timing is exactly right. Virtually every Sherlockian chronologist places "The Retired Colourman" in the summer of 1898, and Adelina Patti - one day after she celebrated becoming a citizen of England - performed in concert on the night of Sunday, July 17, 1898. This story can reliably be placed on that specific date.
I bring all of this up because something somewhat similar occurs with the chronology of one Robert R. Pattrick. I'm certain you'll recall my paragraph about him from a blog post back on November 29, 2017, where I talked briefly about his timeline (and made a few errors). Basically, in March 1963 in the Baker Street Journal (BSJ) he published his own chronology, but with a twist. He used the dates of seven major chronologists to fill in most of the dates. He trusts Watson for a few of the rest, a 1951 BSJ article for one, and his own date for the last. This is his chart: 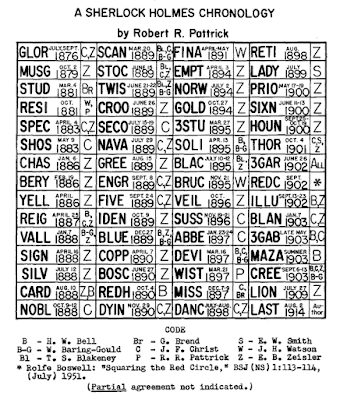 Now, I don't have the reasoning behind Mr. Pattrick's choice of March 21, 1897, for 'The Adventure of Wisteria Lodge' (WIST), but I do know he's all by himself. Not one other person goes along with it. Heck, no one even likes the year. In fact, one chronologist, T. S. Blakeney, says the case took place in either 1896 or somewhere from 1898 to 1902. That's the closest anyone gets to agreeing with the year. As far as the date goes, I'm thinking it might be referenced in one of his other works. As I understand it, he had quite a few things published, so much like Mr. Mason's paper above, Mr. Pattrick's WIST date may well be mentioned in another piece.
I would like to point out that he lists Rolfe Boswell's date for 'The Red Circle' (REDC) as September 1902. I read the article in the 1951 BSJ and it looks as though he specifically says September 25 due to an autumnal concert that Holmes and Watson attended. He says that Watson's "gloom of a London winter evening" could be excused because it might have been cold enough to feel like one even though it was still fall. (He doesn't check the weather charts, but I did. Here is the weather account for the evening from the next day in The Morning Post. You can decide for yourself.)

It does say the temperature was low for the time of year, and at one point in Greenwich (eight miles away from Covent Garden) it got down to 31°. Looks like Rolfe gets a half-point, though I'm still not totally convinced. Still, this is what we chronologists do. Speaking of things we do...
One of things I haven't figured in to all of my databases is individual findings. There are hundreds of articles out there in which someone has a date of their own for a case, like Bill and Rolfe's above, and it would take a lifetime to gather them all. However, in the interest of thoroughness I will likely start amassing them. Bill's date will be my starting point. I have already started to catalog all of my Sherlockian publications like journals and newsletters, and have found some other dates in those. Looks like I still have so much work to do, but it's a good problem to have.
I didn't have a big ending for this post, just wanted to take you through how two things can tie together even though they seem unrelated. I've looked to do something with Mr. Pattrick's chronology for some time, but there just wasn't enough to talk about. Seriously, there isn't. That chart you see above is all there in the BSJ. There's no explanations, no text, no footnotes...nothing. It's on page 62. On page 63 a different article starts. Tying Mr. Mason in gave it enough legs, and you are the beneficiary. 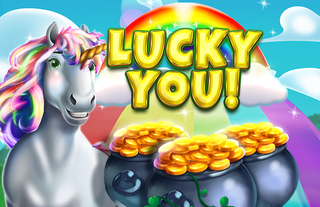 I truly appreciate you making it this far down. This project of mine just keeps going, and lately it seems to have found fresh energy. I have more things planned, and all in the name of keeping this dark corner of the Holmes/Watson world well-lit and accessible. I'll see you in January (in what I can only hope is a better year), and as always...thanks for reading.
Posted by Historical Sherlock at 11:15 AM 3 comments: