Welcome to the 100th blog post here! It's hard to believe we've made it this far together, but we have, and I can't thank you enough. I truly didn't have a plan for this one, but something amazing happened and I have to tell you about it. The timing couldn't have been more perfect, and the incredible part is that I wasn't even looking for it - the whole thing just fell into my life. I can't wait any more, so let's get to it.

That is where I found something that may change Sherlockian history. No, not may - has to. It has to because it is indisputably the earliest known piece of scholarship about Sherlock Holmes. I've made a video presentation about it, but the video doesn't contain the full paper. This post will. Here's the link if you wish to watch it:
https://www.youtube.com/watch?v=bks-LguCG7Q
I am presenting the article here in its original form from the magazine. If you're wondering just how old it is, you'll have to wait until after reading it. That's one of the best parts. Enjoy. 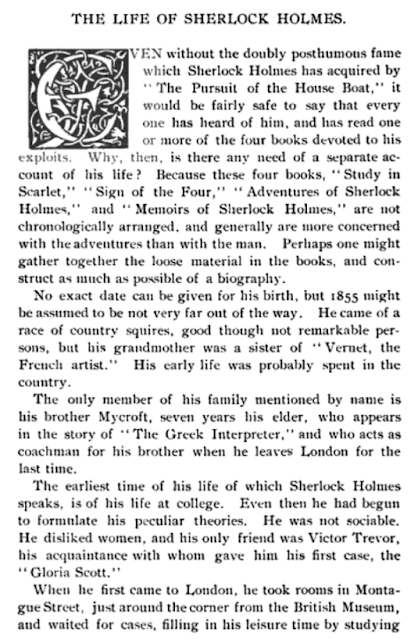 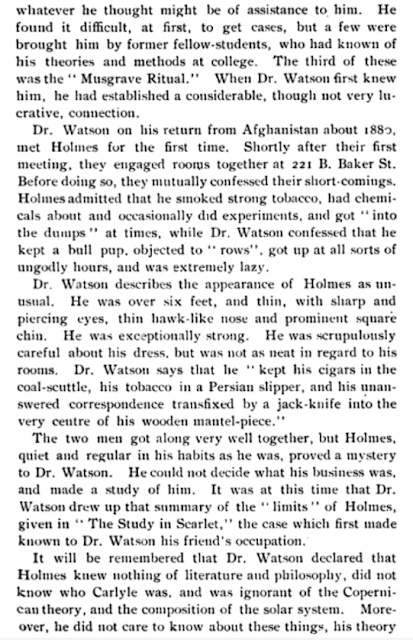 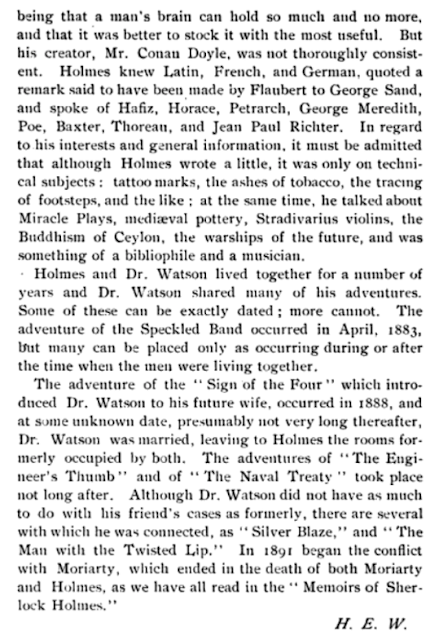 Now that you've read it, I can tell you that this was published in October 1898. According to The Annotated Sherlock Holmes (both versions), the earliest known "serious study" of Holmes was in a piece by one Frank Sidgwick that was published in the Cambridge Review on January 23, 1902. Well, this paper predates that by over three years! How it has slipped past over 100 years of Sherlockian scholars is beyond me, but it did, and I just happen to be the person who found it.
A lot of research went into the initials at the bottom of it, and two possible candidates were found. First, I found a man named Howard Edward Williams. In time he turned out not to be our author based on a couple of different things. Then, Sherlockian Les Klinger found the name Helen Elizabeth Wilson, and no matter what I've found, I have not been able to eliminate her as a possibility. In fact, this young lady was an Arts major and a writer. She also had other pieces published in newspapers and magazines all over the country. Everything about her seems to confirm her as our main candidate. 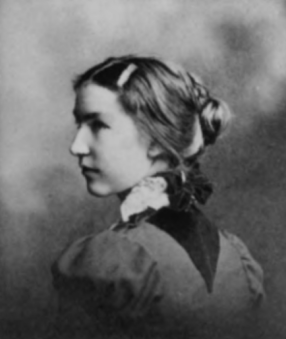 Unfortunately, Helen died very young. She was 26 in November of 1902 when typhoid fever took her life. She hadn't married nor had any children (not that those have to be goals), but she did make her short time here about loving literature and helping others. She is perfect for her new place in our community, and I am thrilled to be able to bring you this newly discovered information.
Had she lived longer, I can only imagine that she would have written more. Her piece talks about the chronology of the cases, and she would've had a field day with the dating snags contained in The Hound of the Baskervilles (HOUN). We can speculate that she had already read the first part of HOUN as it had been published in the States in 1901, and perhaps she was reading the second part (released in 1902) when her life was cut too short. I would love to have read what she came up with for it!
So, now you know the full story. There are more details about her life that are contained in the video, but not everything. Just the big stuff. I have other tidbits, and if I can add to them then we'll do a follow-up post and talk about them. For now, though, you have been introduced to quite possibly the world's first Sherlockian scholar - Ms. Helen Elizabeth Wilson of Bath, New York.
Once again, I thank you for riding this train with me. It's so much fun to do, and so far I haven't lost my gusto for it. I'll see you next time, and as always...thanks for reading.

Posted by Historical Sherlock at 10:32 AM 9 comments: