It's Not About Holmes...But It is

It just isn't possible for me to explain to you how much research I do for this little project of mine. It is something I do every chance I get. If I could figure out how to make a living from it, I'd never stop smiling. There are newspapers to be read, films to be watched, journals to be perused, and lots of other places to look to attempt to find a small nugget of info I can use here. It's a lot like mining, I suppose. I get a small amout of the good stuff while discarding large amounts of unusable product. And sometimes it can take a while for an answer to something I've been chasing to arrive.

In my files I have hundreds and hundreds of papers I've started, notes I've jotted down, photographs I've come across, and many, many other little tidbits that have cought my eye over the years. One of them that I happened upon again recently was the following: 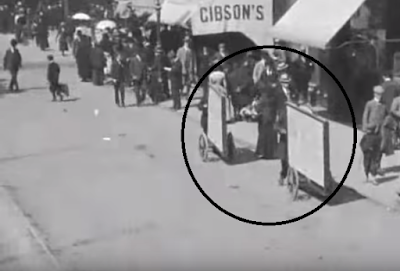 I had done some work on this before, but without success. It was filed away for a proverbial rainy day like so many others, but somehow it resurfaced and the hunt was on again. (Not that I have the time to chase such follies, but if I have a few minutes to look into something, I'll do it. I just love it so much.) The problem was I didn't know what to call those two things. It came from a film clip of turn-of-the-century England, and after watching a lot more of those kinds of film I didn't see any more, leaving me high and dry. Thus, I had to get creative and do what I always do - go in blind and hope for the best. I tried as many different terms as I could to figure out what they were called. Once I knew that I could go further.
I tried all of the oness I could (re)think of, but nothing seemed to work. So, I started looking into publications about advertising. I found numerous references to rolling ads and wheeled billboards, but was never completely certain they were talking about what I was seeking. And then it happened. Page 24 of a book I found on Google Books gave me what I was looking for.

The picture here isn't an exact match to what is on the film, but so far it is the only thing I've found that looks like it in any way, and it is obviously the same thing, just in different form. 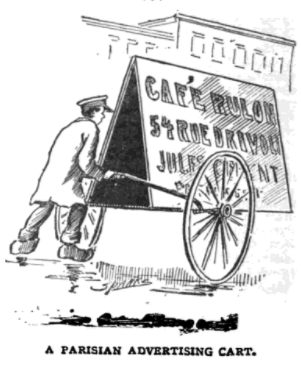 Knowing what to call it gave me my jumping off point, so I began looking for more references to this Parisian advertising cart. However, when you Google the term, this is the only reference that comes up. So, another dead end. And just using "advertising cart" was too general. But, at least I had something. I headed over to the British Newspapers Archive to see what I could find. Lots of results came up, and I began sorting through them until I found one that seemed like it was talking about the same type of cart. I found some that talked about variations of it, but the first one that caught my eye and appeared to be what I was looking for was this: 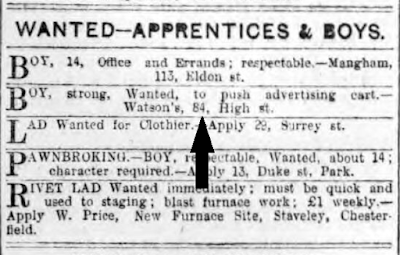 The ad appeared in the Sheffield Evening Telegraph of Thursday, September 20, 1906. (I'm not going to attempt to do anything with the Watson's part of the ad, it was just another of those happy little finds that come with what I do here.) I rummaged through more papers and found even more examples of this same thing, and I was satisfied I had exhausted this topic. I retired for the evening with an eased mind. But, as I lay there it occurred to me that this had nothing to do with Holmes. I would have to try and fix that.
After much thought the following day, I finally realized that there was no way I could tie this to Holmes. Sure, I could say that maybe one of the published cases was being promoted on one of them, or that the latest screen version of The Master was appearing in a play, or something like that, but that was cheating. Basically, this has nothing to do with Holmes. These items aren't mentioned in The Canon, and they have seem to have no place in the Sherlockian world at all.

It all comes down to showing you the research that went into all of this. I'll have to be satisfied with that. I will say that Holmes must've seen these things at one time or another. London, after all, was a melting pot of people, and an ever-growing industrial city. Holmes was a man who got out a lot and observed everything. These fall under that, as do many other forgotten items that would have been so commonplace as to be nearly invisble.
I'll do more posts like this because I have so many things I chase just to see if they will have any bearing on my ultimate goal. Here's a partial list:
Stinkpipes
Ghost Trains
Pneumatic Railways
Police Uniform Changes
Knifeboards
Forgotten Societies
Electric Cabs
Remember that these may or may not turn out to have anything to do with Holmes, but they (and all the others I'm chasing) have to do with his world, and what he would have experienced in his daily life. This post is just such a thing. It's something Holmes and/or Watson had to have seen. Shoot, maybe they even saw one advertising William Gillette paying homage to Holmes on stage. Who knows. Anything and everything is possible.
I'll see you next month with something new, but not necessarily one of the items mentioned above. And, as always, thanks for reading.
Posted by Historical Sherlock at 8:34 AM No comments: