The Other Annotated. (No, Not That One.)

A journey through the shelves here in my office is what inspired this post. We all have those books we pick up way more often than others, and some that lay forgotten. What follows is some thoughts about a lesser known annotated version that sits silently by waiting for its day.

For me, anything with annotations or footnotes or highly-detailed indexes are things to enjoy. You can often find the best information in them - usually the interesting side-stories that aren't as colorful or popular as the main piece. I can remember going through books and just reading those parts. My thirst for that outside knowledge has always been a thing for me.
What caused me to write this, though, is the existence of an annotated volume that some may not even realize exists, or that they may have on their shelves and not know what lies inside. 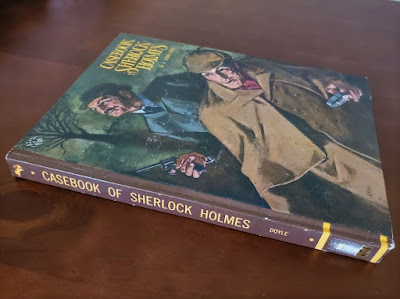 Published in 1968 by Classic Press, with artwork by one Don Irwin, the Casebook of Sherlock Holmes is not terribly valuable even in perfect condition. I think I got mine off a dollar cart in a now-gone bookstore here in town. It's part of a twelve-volume set of educational books, and the Holmes edition was #7 in the collection. One of the best parts about them was that they were "complete and unabridged" according to the back cover. (Yes, it really is in all lower case letters.)

Mine is so clean that it still has the EDUCATOR CLASSIC LIBRARY tear-off mail-in postcard attached inside the front cover. Boy, those were the days, weren't they? For a few bucks kids could mail in a card and get wonderful books delivered to their door. Paper routes, allowances, baby-sitting, lawn-mowing...whatever it took to gather the cash and get a parent to take care of the rest. Then the painful wait. Still, so worth it. 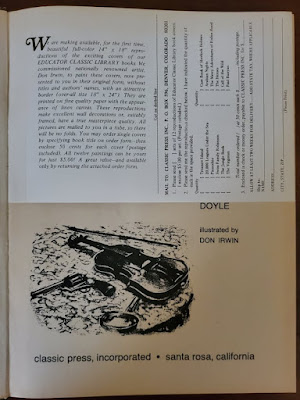 This 281-page monster, and the others, were meant for children. It looks kind of like a big hardback comic book. and has that familiar look that "learning books" had at the time. In the back on page 273 is a section called Backword. (Well, the illustration for the section is on page 273. The actual wording begins on 274.) This part is a series of short pieces about Conan Doyle, detective work in general, forensics, and a little about Holmes himself. It definitely isn't done from the standpoint of The Game, but it's quite well done for young minds. 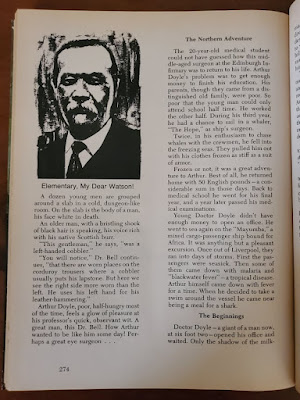 The title of this book is a bit misleading, but then again it isn't. The Case-book of Sherlock Holmes from the 1920's contains none of the stories here. This Casebook covers A Study in Scarlet (STUD), 'The Speckled Band' (SPEC),  'A Scandal in Bohemia' (SCAN), 'The Blue Carbuncle' (BLUE), and The Hound of the Baskervilles (HOUN). SCAN, SPEC, and BLUE are in The Adventures of Sherlock Holmes from 1892, while STUD and HOUN are novels. Where this book doesn't actually mislead, though, is that it's not called THE Case-book, but Casebook. It's a small picking point, but one that die-hard Sherlockians/Holmesians may find troubling.
What I appreciate about this series is how it taught without talking down. The annotations in it can tackle some unusual subjects: 'prognathous jaw' on page 21, 'jarvey' on page 67, 'morocco casket' on page 122, but others look at the standards like hansom cabs and gasogenes. There's one on page 167 which says -
beard: Investigators seldom rely on disguises any more. It takes an expert make-up man to produce a good disguise. Modern investigators rely more on "blending into the background" - being as ordinary-looking as possible.
What I like about that is that it could have said something like - beard: what grows on a man's face.
It didn't, but instead goes into the detecting side of the term and really paints an image for a young person's mind. And the book is littered with these. Happily, all of the books in the series are annotated, so that's twelve nice-sized volumes to get in some great reading and awesome extra details. I don't know much about the organization that put these together, but from the Board of Consultants list in the front you can tell that education was certainly the purpose.

As I said, all annotations are useful, even if they contain nothing chronological. Anything that leads me to research a paper is going to take me into a timeline of some sort. I've said before that anything you have to look into about The Canon from artificial kneecaps to gas lamps has a history, and that history only serves to help date a case. However, this book does contain several annotations that are date related.
Page 73: this note talks about 'the regency' and mentions the years of '1811 to 1820'. This one gets a pass because it's not helpful to us chronologically.
Page 99: this is talking about the month of August, but only about why it's the eighth month and how it got its name. Again...pass.
Page 144: here it mentions Michaelmas and its date of September 29th. Since the holiday is mentioned just in passing in HOUN it gets a pass here, too.
Page 193: I only include this in the interest of thoroughness. It talks about 'neolithic man' and how he likely existed 'possibly 10,000 or so years ago'. Pass.
Page 163: here we have a late Victorian year listed. It's talking about fountain pens and says that they were invented in 1884, but tells us the pen used in the story 'was a dip pen with a steel nib'. Almost...but pass.
The interesting ones are the following. First, page 39 of STUD:
continental governments: A series of revolutions had taken place in Europe in 1848. At this time - 1878 - European governments were still a little nervous.
The publishers fell into a bit of a trap here by saying that it was 1878. It's true that 1878 is one of the first words Watson says in all of The Canon, but he's only mentioning something that happened then - not that it was 1878. (By the way, calling a year like 1878 a "word" seems very strange to me. It's almost like the question of whether a hotdog is a sandwich.) 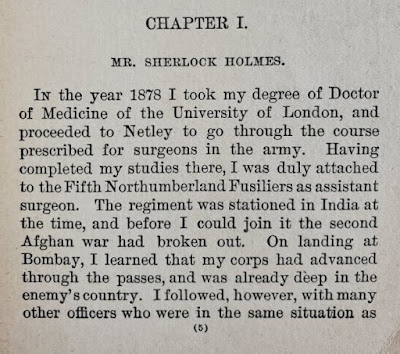 Here's the other on page 183 of HOUN:
electric lamps: This was in 1888, and putting in electric lights was a major engineering feat. One problem: no power outside London. Young [Sir Henry] Baskerville may have planned his own electric generator system.
It seems the editors were saying that HOUN was in 1888. If that's the case, then they must have gotten that information from somewhere else as the text itself does not tell us specifically it's that year. In fact, the very first paragraph of the novel gives us the year 1884, and then a couple of pages later it says that year was "five years ago." Quite the pickle.
The idea of Sir H.B. putting in his own generator has all kinds of possibilities for research, and for that I thank the publishers of these books. 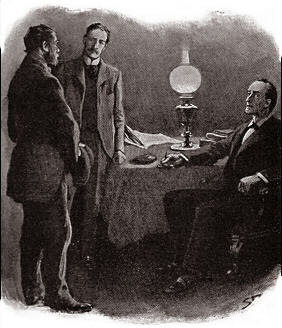 So, there's a look at one of the less-known annotated versions. Chances are you have one on your shelves somewhere, and that you may already know it has annotations, but perhaps you don't look upon it as an annotated version. I know I didn't.
I hope you enjoyed this. I enjoyed putting it together for you, and taking a look at what it had to offer for our goals here. You know how much it means to me when you make it all the way to the end. I'll see you next time, and as always...thanks for reading.
Posted by Historical Sherlock at 8:55 AM 2 comments: