Back in September of 2008 my home society was going to have a meeting featuring Professor Tom Turpin, an entymologist from Purdue University. Since bugs are his specialty, the natural place for Sherlockian minds to go is bees. Now, I know bees aren't technically insects, but for the purposes of our table of organization we'll accept that they are just for the few minutes we'll spend together here. [Correction: bees are insects. I feel kind of silly for the mistake.]

In honor of his visit I thought I would do some research about bees and see what I could come up with. Sometime before I had seen a piece or two in The London Times about beekeeping. I sought them out and re-found them. I looked further and found more. An idea began to form about the possibility that Holmes, in retirement, was one of the folks putting small articles in the paper about the hobby. We all know Holmes kept bees on the Sussex Downs when he gave up detecting, so I looked for items from around that time. The snag was determining when he reitred.
I had already come to the conclusion that 'The Lion's Mane' (LION) happened in 1909, which is in agreement with a low number of other chronologists. (Most like 1907.) 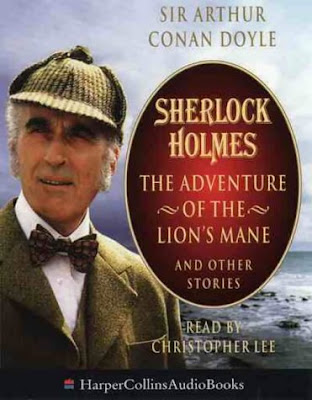 Unfortunately, I do not have the original clips, but I did save the text from them. What follows is the entire article I wrote with the exception of the first paragraph. (It doesn't add anything to the piece.)

April 24, 1908
Bee-Keeping As A Rural Industry,
From a "Correspondent"
As to literature which my be recommended for those who wish to pursue the subject, we may mention Cheshire's two volumes on "Bee and Bee-keeping" and Cowan's admirable little "British Bee-keeper's Guide Book." For those who wish for poetry mingled with science there is, of course, Maeterlinck's "Life of the Bee."

May 17, 1910
Proposed Amalgamation of Societies.
From a "Correspondent"
A special meeting of the British Beekeepers' Association will be held tomorrow to consider a scheme for the amalgamation for that association (the parent body) with all of the affiliated societies, thus forming one beekeeping association for the whole of Great Britain.
[Later in the article...]
It is hoped that the maintenance of one flourishing association in place of the thirty existing associations will establish complete identity of all members who are engaged in the beekeeping industry.

September 8, 1919
Beekeeping Industry Growing.
An indication of the revival of the bee-keeping industry in the country is the receipt by the authorities of over 3,000 additional applications for the supply of sugar for winter feeding of bees.

June 16, 1919
Promise of the Bees. A Good Honey Harvest.
(From "Correspondent")
[This article is 1000+ words long, but the most interesting thing is the last sentence, specifically the last two words.]
An experienced beekeeper can carry out more intricate manipulation in dealing with swarms which issue from supered colonies, but the one mentioned above [removing the queen] is the simplest for those to follow who have not had an extensive acquaintance with practical beekeeping.

You'll recall from 'His Last Bow' (LAST) that Holmes had written his magnum opus on beekeeping called The Practical Handbook of Bee Culture, with some Observations upon the Segregation of the Queen. 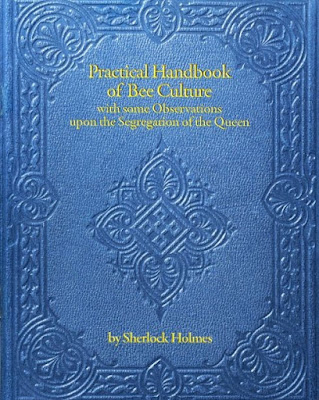 It is interesting to note that there is a large lapse in letters from correspondents, amateur or professional, from about 1912 to 1919. I know it was because of the war, but it was also a critical time for the hobby as apiarists from all over the UK were dealing with something called the "Isle of Wight" disease. However, since we know our hero was chloroforming Germans during this time it might be that the hiatus in missive-writing had something to do with Holmes' post-retirement activites? Could he be the unnamed 'Correspondent'? 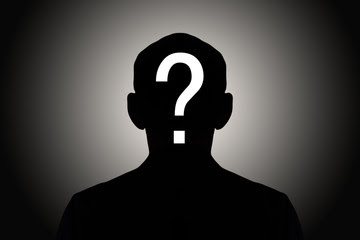 As I read back over this article I'm struck by the fact that I don't recall exactly why I chose some of the pieces I did except that they seemed somewhat universal. What I mean is that I had to skip over a lot of them because they contained info that made it obvious it wasn't from Holmes. The ones I have here seem vague and ambiguous, and could certainly have been written by anyone...including a retired detective from London who just wants the world to pass him by.

Anyway, that's a little taste of the lengths I'll go to in my plight to tie Holmes into his world. I love what I do, and shall never give up in my quest. So, I'll see you next time. And as always...thanks for reading.
Posted by Historical Sherlock at 9:29 AM 4 comments:

I'm getting to my blog posts fairly late this month, and for that I apologize. It' s been kind of a crazy November, and I am just now finding the time to get a couple of these together. This will be the first of two (in keeping with my promise of more than one a month) and it's a recapping of a chronology article I did way back in March of 2009. It was time for 'The Adventure of the Second Stain' (SECO) in the rotation for my home society. So, I took on the challenge.

Here's the article in its entirety. (Really, I don't change a thing. Not even the stupid parts.)

I hope you like pickles, because this has some big ones in it. (My brain defines "pickle" as "harder to figure out than a Chinese movie with Turkish subtitles" if that helps.) This particular tale has a distinction which does not fall on many others - it is mentioned in two other cases. Or is it?
Before we get to those let us look at the internal dating.
First off, Watson tells us that this story takes place in a year and decade "that shall remain nameless." We see that Holmes is busy, and Watson may be living there. We know its autumn as its mentioned twice, and that the night before the case started (a Tuesday) it was a fine night. Later in the story we find that it was solved "upon the fourth day" which was obviously a Friday. So, not much to go on.
However, the late Gavin Brend did research (which I verified) indicating the "Secretary of Foreign Affairs"or Foreign Secretary was a young man throughout this period of time. Normally that position, and that of the Prime Minister were held by the same person. However, for a short while in 1886 the offices were occupied by two different men. Between the the PM was older, so we'll have to go with that.
Now, on to the other mentions of 'The Second Stain' in other stories. Watson refernces it in 'The Naval Treaty,' but there is a problem. He mentions two people who are not in the published story, lists the wrong time of year, and says that he was married at the time. Luckily, with a little bit of work these "problems" can all be somewhat correlated. Interestingly we also find it possibly mentioned in "The Yellow Face." It was grouped with other cases in which Holmes erred but the truth was still revealed. That doesn't fit with the facts in the story, if this is the same case.
However, I did find one comment that could help in some way, but it all depends on how you interpret it."It was my first visit to the scene of the crime." Watson says. So, my question is this: does he mean this crime scene, or to any crime scene? Tell you what - I'll leave it alone. I'm warning you now, though, that I am going to cover this in my discussion moderation of this tale on March 4th at the Illustrious Clients meeting, and probably in a future column. Well, not probably.
So the question depends upon whether or not these three cases are the same, and here's the answer - I don't know. But on the dating question, I have looked at a number of different chronologies and they all have pretty good arguments, so at the monent I only have a tentative answer. Baring-Gould puts it at October 11, 1886, based on weather and the official offices of the above officials. I'll go with that but I may change my mind later. I'll try not to make you wait too long. 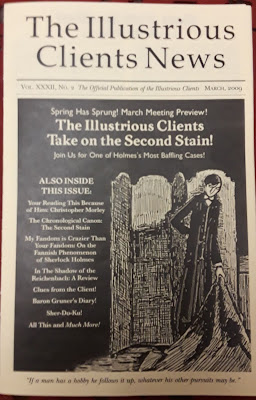 Well, there you have it. Remember that I choose these at random, and don't usually pre-read them. Since I can't recall every one of these I've ever written, I had no idea this one had so many loose ends. Sorry to leave you hanging.
Knowing me I probably still have the story discussion papers from that meeting. However, digging for it would be a massive undertaking. You wouldn't believe what I've kept. But, that's a hobbyist for you. I do have a treat for you, though. I knew where the quiz was I made for the meeting.
I downloaded a cool rug picture, put a big red stain on one corner. That was the top sheet. Under that was a picture of a tile floor (that's hard to make out in the picture) with a stain on the other corner. That way when you lifted the rug, the stain was in a different spot. Clever, right? Problem was that the bottom stain didn't come out on the floor sheet. Still, the idea was cool. (If I may brag for a moment...my quizzes are things of legends. Not necessarily the quiz itself [not that they were bad at all] but the designs or covers or quirks that made them memorable.) (Hmm...blog post idea?) 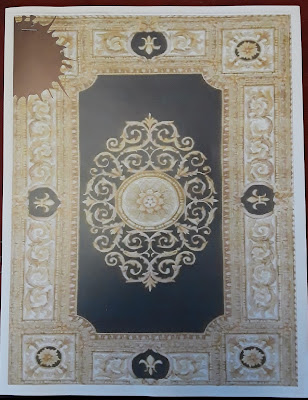 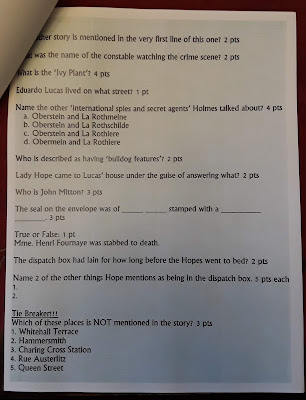 Now, to bring us back to the main subject, I would like to draw attention to the line from Holmes about going to the scene of the crime. It's one of those things that lends itself to interpretation, and some chronologists will go one way, and others another. It's a perfect example of why a definitive chronology will be very hard to come by. Even if you could collect all of the pertinent infomartion about each story that leaves no doubt about the dating of each of them, a line like that causes all sorts of problems. Still, it's a good one to have.
I promised you at least two posts a month, and I will still deliver. I found something I wrote years ago about a mysterious correspondent for The London Times about beekeeping. I'm going to expand on it some and see what I can come up with.
On a side note, I was thinking about all the chronology columns I've written for our newsletter, and I recalled that the very first one I wrote (see my July 2018 post) was 666 words long. I didn't do that intentionally, and it had nothing to do with the vampire subject of the article. It just worked out to that number. So, that was my target number for several of them. Then the editor asked if I could pare it down some. I went to 600 words. Then it became 550, and utlimately to 500 - which is where I am now. I'm fortunate enough to have been in this hobby so long that I can usually put out a 500 worder without to much pre-planning. 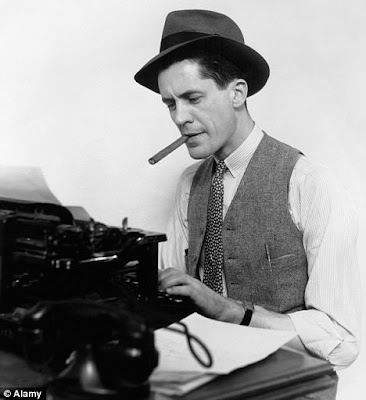 Anyway, I'll get off this path to the past and tell you that I'll see you next time. And as always...thanks for reading.
Posted by Historical Sherlock at 3:48 PM No comments: