Yes, That's Not In The Canon...Maybe

For this month’s entry I have chosen a subject which fits nicely with the time of year historically and horrifically - what were Holmes and Watson doing at the time of the Jack the Ripper (JtR) killings? As you may know this mysterious individual killed a number of women (the exact figure is heavily debated) in the fall of 1888 in London's Whitechapel area, and many have wondered whether Holmes' casebook contained anything about those horrible deeds. I know a lot of books and papers have been written about this Holmes vs. The Ripper thing, but I have very few of those in my collection, and as such I can look at it with unsullied eyes and make some clean observations. So, let’s take a look at the database and see what we can find.

One thing I would like to do right up front is mention the names of the women. They are often side notes when it comes to this mystery, so I want them to be recognized. Here are the five officially accepted victims and the dates they were killed/discovered, 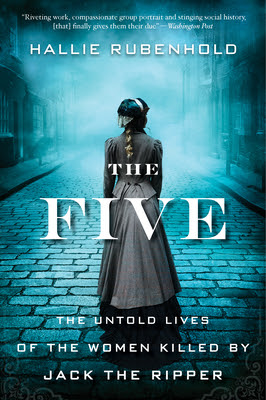 As we know, The Canon is completely silent on this matter. I mean there's not even a hint of a hint about the mystery. I will not attempt to make any connections that aren't there, but will simply give you a glimpse into what Holmes and Watson (H & W) were doing at the time of the murders. (For brevity, just assume the year I'm talking about is 1888 unless otherwise stated.)

'The Cardboard Box' (CARD) - Look for the data about this one closer to the end of the post. (It's so much juicier than the rest.)

‘The Crooked Man’ (CROO) - The online chronologist John Trumbull says Holmes and Watson were involved in this case sometime during the month of September.

‘The Dying Detective’ (DYIN) - This one gets a half-point. Vincent Delay says it happened on "a Sunday in November" but not which. There were four, but the 4th and 11th would be the only ones to concern us. Still, neither help us here. The 4th is during the murders, and the 11th is right after the last one, but DYIN was a one-day case. Thus the half-point.

The Hound of the Baskervilles (HOUN) - Baring-Gould placed this case (along with Janacek) on September 25, while Shu likes September for this case, as well. Mike Ashley, on the other hand, likes some time in October for HOUN.

‘A Case of Identity’ (IDEN) -  H. W. Bell likes mid-September for this one. John Hall sort of agrees by saying it fell some time during the week of September 17th to the 24th. Trumbull needs to figure out when H & W were dealing with CROO (see above) because he says they were working on this one on the 18th. Chris Miller says they worked on this one in September, but not when.

‘The Noble Bachelor’ (NOBL) - NOBL is all over October for chronologists. Baring-Gould originally placed it on October 12, but recalculated and shifted it to 1886. He would've been in the company of June Thomson, Bradley & Sarjeant, Henry Folsom, Martin Dakin, and Toshio Suzuki. The mysterious online blogger Noble Bachelor says the case was at the beginning of October, while Blakeney and Edgar W. Smith say just October. J. F. Christ and Robert Pattrick both say the case started on October 9, while the incomplete timeline of Carey Cummings says it was the 26th of that month. Ashley pops in again and says just September.

The Sign of [the] Four (SIGN) - The Canon places this case from, July 7 - 9, 1887, though that is generally not accepted. An actual date for this one is very debated. [deep breath and...] Brad Keefauver says this case started just five days after the murder of Polly Nichols on August 31st. Baring-Gould once placed SIGN on September 7, though he changed his mind years later, but Suzuki thought he had it right the first time. Baring-Gould eventually landed on September 18, and Bradley & Sarjeant, along with Janacek, think he's right. Christ places it exactly one week later, while Cummings and Dakin say it was two days after Christ's. Ashley, Smith, and Shu say it was during the month of September, but go no further. Thomson and Craig Marinaro say it may have been sometime in September, but thinks July 7th is also a possibility.

‘Silver Blaze’ (SILV) - Keefauver places this case on October 25th, while Dakin says it was just October. Hall can't do better than sometime around the end of September into October, 1888, while Folsom prefers September 18th or the 25th.

I would like to point out that no one has a case starting on any of the dates for the deaths of those poor women. The closest findings are that Christ had GREE happening on August 29. I say 'happening' and not 'starting' because everyone agrees it was a one day case. So, it's not likely H & W were still dealing with GREE when the murder occurred.

But, Suzuki (and originally Baring-Gould) has SIGN starting on September 7. This case was at least a two-day or three-day affair, depending on whose chronology you're reading. If Suzuki is right, H & W would've been working the next day when 'Polly' Nichols was killed.
It's at this point there might be evidence of JtR in The Canon. Not the person, but the case. As I mentioned before, Watson tells us this case took place in July 1887. (There's a confusing September reference in it, too, and chronologists have done a lot of typing trying to figure it out.) But, regardless if it's July or September 1887, the majority of timeliners think the case HAS to be in 1888. Now, Hall goes along with Watson and says the whole thing started on July 7, 1887. Brend and Butters agree with the month. Bell, Delay, Trumbull, and Jean-Pierre Crauser say it was September 7, 1887, and Miller likes that month, too. The remaining twenty chronologists say that it was 1888.
The question, if one raises it on just this case alone, is why Watson changed the date. Were he and Holmes actually involved with the JtR situation at the same time as SIGN? SIGN wasn't published until February 1890, so he had plenty of time to make all of the necessary adjustments. But why? Try as I might I can't come up with a reason to change the date of the case in relation to the Ripper problem. And it will bug me.
But, maybe he didn't actually change the date and most of the chronologists have it wrong. Maybe I'm making too much out of this. Maybe there truly is no evidence of JtR in The Canon. (I'm still going to ponder it, though.) 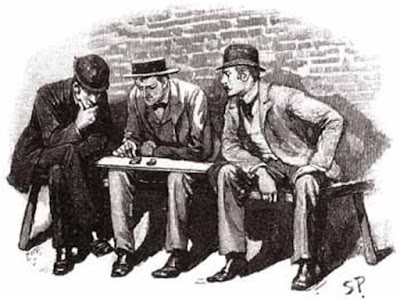 So, let's talk about 'The Cardboard Box' (CARD). This is one of the few times we hear of mutilation in The Canon. A woman receives a package containing two (mis-matched) human ears. H & W investigate and figure it all out. But...
The dates for this case vary. The largest agreement is for August, however. Dakin, Pattrick, and E. B. Zeisler say it started on the 10th. Blakeney, Thomson, Hall, Bradley & Sarjeant, Folsom, Ashley, and Roger Butters all agree it was sometime in August, but don't specify when.
This case has a mutilation which mirrors that of Catherine Eddowes. In the infamous 'Dear Boss' letter that Scotland Yard received on September 29, the writer (allegedly JtR) mentions clipping off a woman's ears and sending them to the police. The next night he did what he promised, though he never actually mailed them. (This is also the letter where we first see his now famous moniker.)

CARD isn't exclusively an 1888 case, though. 1882, 1884, 1885, 1887, 1889, 1890, and 1891 are all chosen as possibilities by a gang of different chronologists. August 1888 is just the most agreed upon (by ten people).
H & W and JtR are always going to be indelibly linked. Two major forces in Victorian crime, albeit on different sides, have to cross somewhere. More pastiches have been written about it than anything else, and the amount of ink used to find or make connections will continue to flow. Probably forever. It's not a big question for me, though. Yes, I'll spend some time thinking about it, but it will just be one of the many thoughts floating around in the the ol' brain pan about The Amazing Two and their world. Maybe one day I'll come up with something concrete, but for now you have before you all the information I can offer.
I'll see you next month, and as always...thanks for reading.
Posted by Historical Sherlock at 9:42 AM 5 comments: