One of the stickiest problems in The Canon is the dates within 'The Red-Headed League' (REDH). Every chronologist has had to deal with it, and I was one of them. Back in 2010, however, I think I stumbled upon an explanation that would fix everything. I'm pulling this one out of the archives, and am proud to present it here. I still stand behind this, but can imagine it will cause some controversy. Either way, here it is.

God Save The E-E-N
by Vince Wright

E-E-N. What, you ask? Well, with these three letters I will do something that has not been accomplished hitherto, and it will be the supreme apex of my chronological career. Ready? I am about to solve the date problems found in 'The Red-Headed League.'
When I took up the challenge of being a chronologist, I dreaded this story the most as I knew it would be a real bugaboo. But, I put my mind to it and figured out a way to explain away the major puzzles.
Here we go.
We know the story took place after 'A Case of Identity' and in autumn. I dated 'A Case of Identity' in 1888, but Holmes refers to it as if it were very recent. What he says, however, is "the other day, just before we went into the very simple problem presented by Miss Mary Sutherland..." I think he was referring to a conversation they had about the story, not the actual event. Maybe they were touching up on the details before its publication in the Strand, which was after this one.
The autumn part works out as it's October, and Jabez Wilson comes to Baker Street wearing a great-coat, a frock-coat, a waistcoat, and an overcoat!
So, what about the problems? First, Wilson presents Holmes and Watson with a copy of The Morning Chronicle from April 27, 1890, says that he spent eight weeks copying the encyclopedia, but then shows a sign stating that The Red-Headed League had been dissolved on October 9, 1890. Rudimentary math shows that those two dates aren't eight weeks apart, they're 23+ weeks apart. Also, The Morning Chronicle had been out of print since 1864! And, April 27, 1890, was a Sunday, and there were no Sunday papers in Victorian London.
As for the paper, Watson says it was dated "just two months ago." That would put the case in late June. This does have some validity. Holmes states that Sarasate is playing in London. Sarasate did, in fact, play there in June of 1890. This case doesn't in in June, though, it ends in October, and he did not play London in October, 1890, but the explanation is an easy one. The "two months" statement corresponds with Wilson's "eight weeks," but if Watson were editing the piece for the Strand and remembered that Wilson said that, then it would be logical for him to put in the phrase "two months" even if it didn't actually happen.
I also believe the newspaper was a fake. When it is shown, Holmes gets all giggly, while Watson is just astounded at the events. Holmes asks him to make a note of the paper and the date. He then asks questions about Wilson's employees only, but not the newspaper, while Watson kept asking about the ad. Then Holmes calls Wilson's statement "entertaining." My conjecture is that he knew it was a fake, which is why he didn't ask anymore questions about it, but allowed Watson to be taken in by it.
Geting back to Sarasate, when Holmes said that he (Sarasate) was playing in town, he could also have meant that the music of this was being played. Several artists at the time were giving performances of his pieces, so I think it's a pretty good bet that this was what was meant.
I really wasn't sure how to figure out the problem with the dates being more than two months apart. I then realized that three simple letters would solve it. If you accept the fact that Watson added the "two months" part later, then it is reasonable, I think, to say that Wilson spent eighteen weeks, not eight, copying the encyclopedia. Now, I know that most people would say 4 1/2 months, but it is possible to hear it the other way. So, if it's eighteen weeks, we are only left with a little over a month to explain away. (23+ weeks minus 18 weeks.) Wilson had to have taken days off, like Sundays and holidays. He even admitted that he wouldn't visit his own business for weeks at a time. Now, those days off may not add up to one month, but it's pretty close. Basically, I think he spent eighteen weeks doing his "job," but probably not eighteen straight weeks.
The only other snag we run into is that Wilson came to Baker Street on a Saturday, the same day he found the note tacked to the door. If I am right that he didn't work every single day, then it's possible the note hung there for two days before he saw it. See, October 9, 1890, is a Thursday, not a Saturday. Now, Wilson does say he went every day, but that has to be an exaggeration.
So, in my opinion everything in the story can be fitted together and I can say that the case began on Saturday, October 11, 1890, and ended the next day. 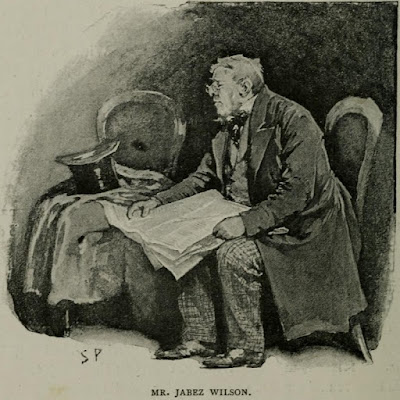 You know, I'm still pretty proud of this. One day I'll take another look at it with more serious eyes and see if I can make my case even stronger. One day. For now, though, it was fun to pull this thing out and read it again. It's actually one of the longest pieces I've ever put in our home society newsletter, and one of my best, I think.

On a side note, I had planned on tackling a different subject for this post, but it turned out to need a lot more research than I had anticipated, so it's a work in progress, and one that will eventually be on here.

Anyway, I'll see you next month. And as always...thanks for reading.
Posted by Historical Sherlock at 11:19 AM 5 comments:

Let's Do The First Item First!

Okay, everyone, it's time. Time to start giving away stuff. My stuff. My collection. Now, these items will be yours. (Well, maybe not YOU, but they will be someone's.) This is the first installment of my Great Historical Collection Reduction, and I love that it's happening. So, as Bob Barker would say...let's take a look at the first item up for bids!

The first item is a 1974 book by Peter Haining called The Sherlock Holmes Scrapbook. It is in its original dust jacket, and the book is in impeccable condition. I have two copies of this, and only need one. (And the one I'm keeping doesn't have the dust jacket!)
There are a few problems with quality, but they all belong to said dust jacket. Below is a series of pictures showing everything about it. Please remember that I don't collect for value, so it's rare I'll have something in mint condition. Also, I am passing these things on just as I got them. I will make no modifications or repairs. They are free, after all, and I'm just trying to pay them forward. So, please make sure the item is acceptable to you. If you get something and you're not satisfied with it for some reason, please give it to someone else. Let's keep these things moving. 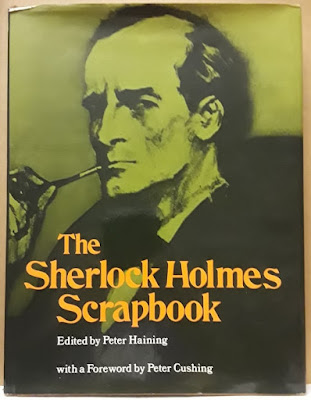 This is the book. It measures about 15 X 12, and is about 1/2 inch thick. (That dark spot in the middle is just a reflection from my camera. The cover is spotless.) 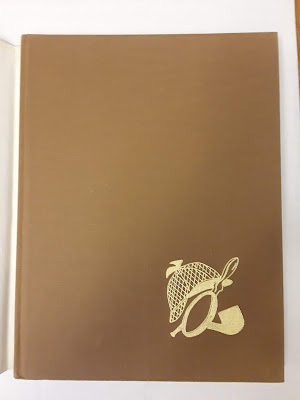 This is what it looks like without the DJ. It's almost perfect. 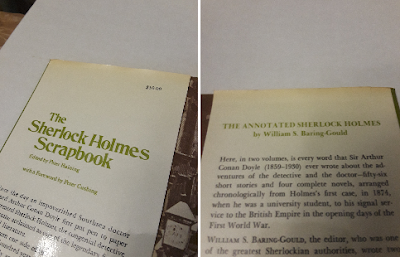 The DJ has some curling and tiny tears at the top, but nowhere else. These two shots show the yellowing and curling. The curling can be flattened with an iron, though I suggest you watch a YouTube video or two about how to do it first.

This series of pictures show more DJ problems. Again, it's only along the top. There is some wear along the bottom where the book was slid in and out between other books, but it's minimal. (Third picture above.) It has one minor corner bump. The brunt of the wear happened to the DJ. 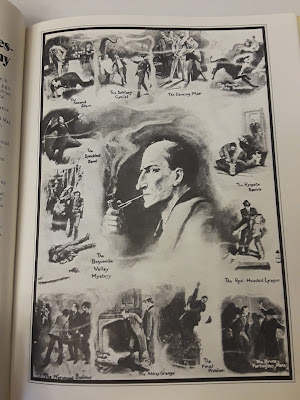 The book is perfect inside. No marks, no writing, no tears, no smudges. This page is the only one with any kind of mark. It's at the bottom, is smaller than a pencil eraser end, and looks to have happened in production. That is the only thing I could find in the entire volume. The book has no odors, and was not kept (by me) in a smoking home. I don't remember how long I've had it, or where I got it, but I know it's been many years. So, any smell it came with (though I recall none) has hopefully vanished. 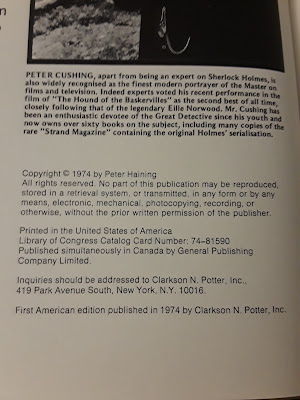 Last one. This shows the pertinent info to collectors and book people.

Now, if you think this is something you might want, then answer the trivia question below:

(NOT counting the story title itself...) How many times does the phrase "illustrious client(s)" appear in The Canon - and in which stories?

The rules are simple:
1. Answer the trivia question by sending me your answer on Messenger, or by email. (Historicalsherlock@gmail.com)
2. The item will be up for one week, and then a winner will be picked from the correct answers by my wife on the 16th of each month. (Entries end at midnight on the 15th.)
3. I will mail you the package soon after.

If you have any questions about this piece, let me know. I'll happily send other pictures, or provide more info.

Good luck!
And as always...thanks for reading.
Posted by Historical Sherlock at 11:20 AM No comments: