The "Birth" Of A Chronology

Last month I lamented the tale of the "death" of a chronology. In short, after further examining one of my thirty beloved timelines I found one of them was not what it appeared to be, and had to take it off the list. But, from that death came new life. Let me explain...

The Aimee Shu chronology was one I always looked at with suspicious eyes, and finally I was able to satisfy that suspicion. It was actually just a re-print of William S. Baring-Gould's infamous chronology, but errors on the original webpage had convinced me it was a fresh take. When it was discovered (by me) not to be, I deleted it and now have something fun to share with my grandchildren. (Dreaming, here. Leave me alone.)
Within a day or two word came from another chronologist, Brad Keefauver, of a chronology by someone with whom I was not familiar. Back in 2009/10 this person, who is a world-famous writer named Steve Englehart, had compiled his own timeline, and he and Brad had corresponded about it. I didn't know it (or he) existed, and I've found since then that we chronologists should talk a lot more because we're all pulling dust bunnies from the chronological bins of Sherlockian history and surprising each other with them.

Yes, that Steve Englehart!
Brad sent me a copy of the work, and I sat down to study it. Turned out to be well thought out and interesting, but had a little curiosity at the end. Brad and I talked about it, but without conclusion. So, I tried to find a way to get in touch with the author. One of those ways was to use the email address off the now 11/12 year old pages I'd been sent. It was a long shot, but...
It worked! The guy was still using the same one! We "talked" a number of times, and I asked him about the curiosity. He responded by sending me the absolute final version. That would answer all questions. Within a week, though, he'd gotten the chronology bug again, and contacted me to let me know he'd revised his decade-old timeline, and sent me that version. I happily added all of his info to my database.
Then, a few weeks later, a brand new and unknown chronology effort popped up. A Sherlockian, whom I had never heard of, put his book on Amazon, and our world got ahold of the info. A. R. Colpo had undertaken the task and created a new (and interesting) timeline. I had his book a few days later and began devouring it that night. 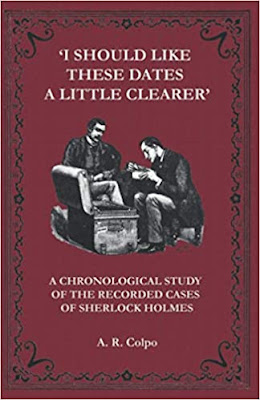 While reading his book something caught my eye. I remember saying, "Who...is...that?!" out loud, and my wife rolling her eyes at my excitement. In a footnote on page 4 was a name I somewhat recognized, and a book title I also somewhat recognized. Turns out a copy was on one of my bookshelves. Thumbing through it made me realize that this book, Sherlock Holmes Detected by Ian McQueen, contained a chronology. It's not a full one, though - nine cases are not dated. Still, it's a 51-case chronology. That's good enough for me. (That leads me to a future post idea of mini-chronologies. I have to do more talking with Mr. Keefauver on that first, though.) 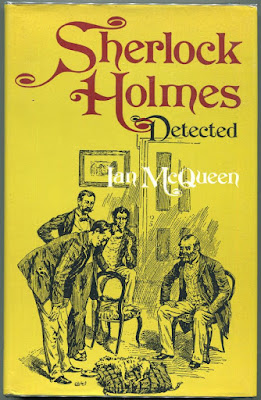 So, after the crash and burn of a chronology, I suddenly had three new ones. Talk about redemption. My database is quite large, and it will take some time to not only record all of the info, but also to dissect and ingest it. My Sherlockian feet were just above the ground most of the time, and I looked forward to doing the "work" on these new timelines. 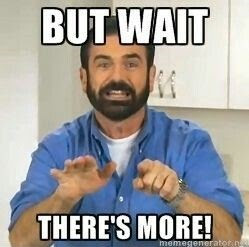 At work one recent evening (I'm a 2nd-shifter) I got an email notification. It was from another chronologist - one whom I referenced many times as having a chronology he hadn't shared with anyone. Well, David Marcum was in a sharing mood, and attached to the email was his timeline. I was thrilled, but didn't have time to look at it until I got home (which I did before I even took my shoes off). Now I had a fourth one to work on, study, and enjoy, and truly looked forward to doing so.
As of writing this I have them all included in my system. One of the things I look for are dates that are unusual or eye-catching. I can say that Mr. McQueen's dates stay pretty much within the ranges that are accepted in most chronological circles. He doesn't stray far from the "norm." Mr. Marcum's are pretty standard, but there are some fights with convention in there, and I look forward to many conversations with him about some of his ideas. The Englehart work has some interesting dates, and I love contacting him with questions and getting his chronological dander up. The Colpo book has some fascinating thoughts, and I hope to be able to talk to A. R. soon and chat about them. (They're explained in the book, of course, but sometimes new nuggets of info are waiting to be asked about.) 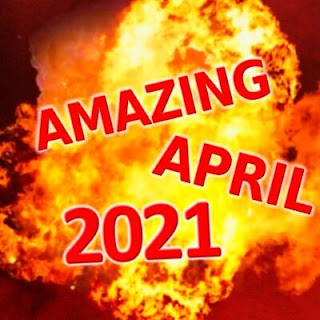 From this point on I will refer to 2021's fourth month as "Amazing April" because of the number of chronologies that came to light. Not since I started all of this and began recording dates from the back of The Sherlock Holmes Reference Library have I had so many to enter at one time. It's a good problem to have, and I love having so much work to do. It's still a passion, and probably always will be.
On a side note: I was contacted by a Sherlockian from overseas and asked my opinion about which chronology I felt stood above all others. I had a tough time with that, but I was able to give an answer. I explained that Baring-Gould was still the standard, but that I thought the E. B. Zeisler timeline was superior. I also added that the Martin Dakin one was just as amazing. In the end I recommended Zeisler, but felt bad (almost immediately) about doing so. I do not want anyone to feel slighted. I have read all of the chronologies and can remember being spellbound by Zeisler's incredible research and explanations. Unlike J. F. Christ, Zeisler doesn't paint himself into bad corners that he has to find awful ways to get out of. (I was unsure of Zeisler for years, but have changed my mind. I even stated on my I Hear Of Sherlock Everywhere interview that I liked Christ's but not Zeisler's. I have completely flip-flopped on that. You can hear that here.) 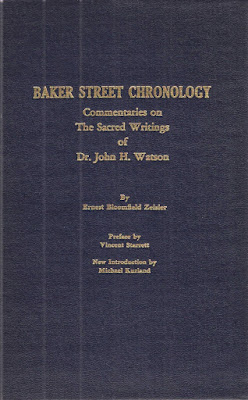 Brad Keefauver's list has some of the most creative (and thus very respected by me) ideas behind some of his dates, but I find myself wincing at some of the others he has. I do like The Brad, but can't accept his timeline completely. (He knows this, and expects it, I think.) The new Colpo effort made me recoil a few times just in the first chapters, and I will need time to try and get behind his way of thinking. Zeisler is thorough and understandable, and while I don't agree with every single date he has, I still think his endeavor is worthy of first (or near first) place.
Well, that was a mouthful. Or post-ful. Lots going on as I used to say in my DJ'ing days. (That usually meant not enough was going on to talk about, but you had to sell it to the listeners.) With the new Chronologist Guild, the total revamping of my database, new chronologies coming in or being discovered, and interesting ideas about this subset of the hobby being bandied about, it's been busy. I love it, but even I have to walk away from it for a bit sometimes and de-Sherlock.
I can't even imagine what May's post will be about - I have about a dozen possibilities right now. Either way, I'm always happy when you make it until the end. I'll see you again next month on here (and weekly on Facebook), and as always...thanks for reading.
Posted by Historical Sherlock at 8:58 AM 7 comments: