In The Footsteps Of William S. Baring-Gould

When I first got interested in the Sherlockian community, nearly 20 years ago now, I had only The Annotated Sherlock Holmes by William S. Baring-Gould to feed my new obsession. The awe with which I looked upon this publication has never faded with me. It is still my go-to for info and ideas. At the time I was sure there wasn't anything I could find that would top it. It was annotated, illustrated, and chronological. Basically perfect.

I saw in some of those annotations that other people were interested in the little dating problems. Later I learned of newsletters and pamphlets. Then, somewhere along the way I picked up a small first edition of another chronology book. I don't recall where and when I found it, but I do remember being very excited by that light sage green trade paperback. My interest grew. 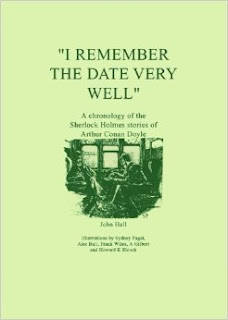 I Remember The Date Very Well is a 1993 book by eminent Holmesian John Hall. It seems to have been put together rather quickly. Most of the paragraphs are indented, while a few are not. (Others have an altogether different indentation.) It's only 78 pages long, doesn't have an introduction, and Page 1 is where the action begins. Mr. Hall finds himself facing the same frustrations every other chronologist does, often finding himself struggling with interpretation. Does the term "week" really mean a seven day week, or does it mean "around" a week? Does "all day" actually mean "most" of the day? He uses phrases like "most likely" and "very vague" at times, and finds himself in disagreement more often than not with others.

He does add a built-in escape route for all of his indecisiveness, however. "Some Sherlockian scholars persist in taking everything Watson says quite literally, forgetting that he was not giving a verbatim account - something he was not necessarily always in a position to do anyway - but telling a story for the amusement of the general reader."

So, how does he compare? I was shocked to find that Hall only agreed with Baring-Gould 13% of the time. Eight times they completely agree, but to be fair there are some stories where they come very close to agreeing and get to within the same week(s). They do this 13 times. Seven more times they get to within a month or two of each other, but the rest of the time they rarely land in the same year. In fact, with one story (SHOS) they are 14 years apart.

To show how they differ using the same evidence, here are Hall's paragraphs on SHOS.
"SHOS is a horse of a different colour. Baring-Gould dates it as 1902, but I am not happy with that at all. According to Baring-Gould, SHOS is a late case for three main reasons. Holmes uses a microscope in it, and he never did so before; Merivale, the policeman, appears in no other case, which he would do if SHOS were at the beginning of Holmes' career; and finally, there is a page boy at 221b, who must belong to the later, more prosperous years, of Holmes' stay there."

Hall then goes on to lay out his case for each of these points. He believes Watson's lack of mention of a microscope before doesn't mean Holmes didn't use one. He also points out that Merivale wasn't the only policeman who was only mentioned once - that there were at least four more. And finally he reminds us that "a boy in buttons" is found in IDEN (which most place in the late 1880's) and therefore that clue means nothing. (The rest of Hall's explanation is a page and a half long, and relies pretty heavily on SILV, HOUN, SIGN, and Watson's pension fund. Ultimately he lands on the end of May 1888.)

Stories where they are within the same few months:
ABBE, ENGR, GOLD, ILLU, MUSG, RETI, and SIXN

When it comes to the variances in findings, the way the two men get there is very different in some ways, but the same in others. Hall uses a minimalist approach and only uses how the cases themselves work for and against each other. Baring-Gould uses outside information. Hall rarely uses other factors - weather, street names, important dates - to prove his findings. Baring-Gould uses all of those and more, but still prefers to use his weather reports to finalize. Both use Watson's marriages, but as you can see by the differences in their dating, they do not often agree.

Once I was aware that people could come to such varied conclusions I started looking for more titles. More opinions. More data. Eventually I would go on to find about 20 chronologies, and to my delight and chagrin found that there is little agreement at all. In future posts we will examine more of those.
Posted by Historical Sherlock at 3:16 PM No comments: