Not Only Was Just "Sherlock Holmes Baffled"... 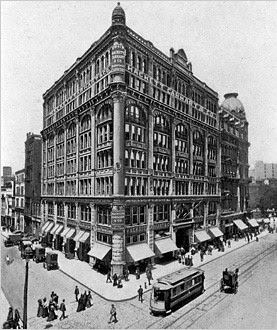 On April 26, 1900, two actors walked onto a hastily designed movie set on the roof of 841 Broadway in New York City and unknowingly prepared to make history. One donned a head-to-toe black outfit in an attempt to look like a burglar, and the other put a robe on over his clothes. He stuck a pistol in one pocket and matches in the other. In his mouth hung a cigar. 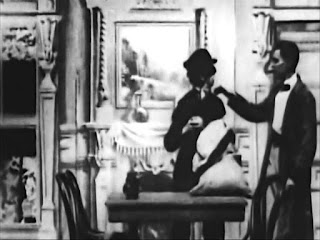 Usually only one camera was used to record these early pieces, and that was the case here. When it clicked to life the duo acted out a very early version of trick photography, with the thief disappearing and reappearing. Once completed the black and white film would be 18 feet in length and 49 seconds from beginning to the end (once you added the opening credits and the cheesy chamber music). And though the action only lasts 31 of those seconds, the pair had just recorded the first manifestation of the world famous detective Sherlock Holmes on screen. Including the name of Holmes also made it the first detective film, and it was likely used due to the popularity of the character.

The "story" itself bears no resemblance to any Canonical case. In its entirety it goes like this...

At Baker Street (?) a burglar is filling a sack with various items when a cigar-chewing Holmes interrupts him. Holmes taps the thief on the shoulder and he promptly disappears. Holmes sits down to ponder what just happened. He lights his cigar just as the villain reappears in front of him. The detective pulls a pistol and shoots, but the crook departs again. After several more poofs and re-poofs he finally disappears for the last time. The Master, baffled, throws up his arms in disgust. (The backdrop is a painting of a fireplace, vase, and piece of art which has been hung on a pre-existing wall that has a door and a window.The only actual items on the set are the table and chairs, and a bullseye lantern which is setting on the table. I am thrilled to admit that I own an authentic one that is the same type.) 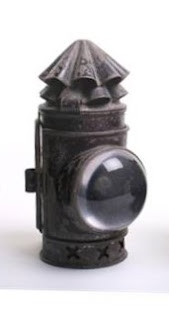 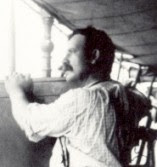 This "motion picture" would be one of thousands made by The American Mutoscope and Biograph Company, also called AMBC. (In time the name was shortened to simply Biograph.) Arthur Marvin, brother of company co-founder Henry Marvin, was the director. This was one of over 400 he did. The movie, titled Sherlock Holmes Baffled, which was shot on 68mm stock (yes, 68mm!), was released in May of 1900, but wasn't registered until February 24, 1903, under the production number H28561.

This was the kind of item that was shown on Mutoscope machines. A person inserted a penny or nickel (hence the later Nickelodeon machines) and watched it through a small window. (It's where we get the term peepshow.) Eventually the films would wear out and were often discarded.

In 1968 the eminent Sherlock Holmes film historian Michael Pointer identified a paper copy of the print in the Library of Congress Paper Print archive. It was thought that it had been lost. Until 1912 motion pictures were not covered by copyright laws, so any companies that produced films submitted paper prints to register their work. Developed like a still photograph, the light-sensitive paper was the same width and length as the film itself. This is how thousands of movies from that time are preserved. This film has since been transferred to 16mm film and is in a collection at the Library of Congress. 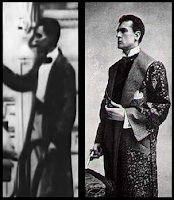 There are a couple of little curiosities about it:
1. The work is not flawless. When Holmes sits to contemplate what just happened he lights his cigar and then jumps back when the thief reappears in front of him. But, he reacts before the reappearance. The timing was off.
2. I have watched this thing many times, and I am always convinced that the thief is being portrayed by a woman. Watch it and see what you think.
3. The look of Holmes is almost certainly a loose copy of Gillette's on-stage outfit. It's amazing to think so since the Gillette play had debuted only 5 1/2 months earlier!

This is nearly everything we know about it. Research makes it possible to determine which types of machines it was shown on, the other titles it was shipped with, and which theaters it was shipped to, but what has never been discovered is the name of the actors. The producers used anyone they could find, from vaudeville performers, to friends and family. I have also read that they would go out and get people walking on the street for extras. The "stars" were kept nameless since the movies were the draw, not them. The folks at AMBC may have had the names recorded somewhere, but that information has never been found. In fact, the payroll records still exist, but unfortunately yielded no usable information.

There are a few candidates for title of World's First Screen Holmes: William Gillette, Walter Huston, and Douglas Fairbanks, Sr. All of these are very doubtful, but further research may be necessary before ruling any of them out completely. Maybe someday new evidence will come to light that will tell us the name of this man and his companion, but until then it will remain a Sherlockian/Holmesian mystery of the highest order. Watch the full movie here: https://www.youtube.com/watch?v=jP_aPe-YsCI