No Babbage Restrictions For This Mars Flight

It's a rare day when Sherlock Holmes and/or Dr. John H. Watson, M.D., aren't in the news in some way. The figures are so iconic that it's almost impossible for them not have an influence on the world's stories. Sometimes, though, they do so when they're not even ON this world.

Recently it became known everywhere that NASA's Perseverance Rover touched down on Mars. Science folk, and even the average person on the street, were definitely awestruck by this achievement, and it's made all the more cool to we Sherlockians/Holmesians/Watsonians when we heard about an instrument used on the Rover called SHERLOC. The acronym stands for Scanning Habitable Environments with Raman & Luminescence for Organics and Chemicals. (SHERLOC certainly seems easier.) Basically it's a laser device that can scan a rock and figure out its composition. 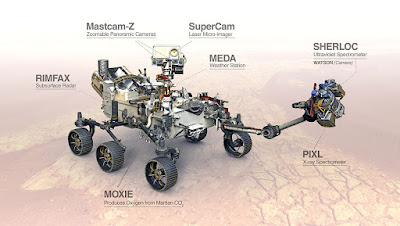 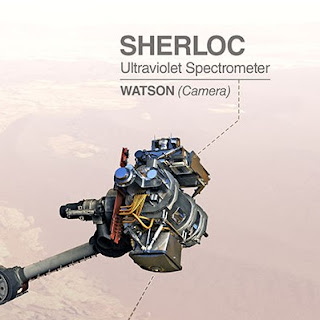 What makes all of this even cooler is that another instrument that will work in tandem with it is called WATSON. WATSON (Wide Angle Topographic Sensor for Operations and eNgineering) will take high-resolution pictures of what SHERLOC scans. Even in space The Amazing Duo is working on mysteries together. Quite awesome.

Now, this reminded me of a piece I wrote for my home society's newsletter some years back about something similar. Let me give a bit of backstory...

I love books. Always have. When I was in grade school back in my little hometown I always looked forward to Thursday. That was Library Day. Room 17. Ms. Hankla. (I think it was Ms.) We got a half-hour to find two books. Anything we wanted. That room introduced me to so many things that I now hold dear. When I got older I started going to the "big" library in the "big" town five miles away. It was a gorgeous limestone building (see it below) that I later discovered had been designed by Walter B. Griffin, a student of Frank Lloyd Wright. I spent a lot of time there. Later, when I moved to Indianapolis, I found the massive library there and visited quite often. That's where the news of today and my story intersect. 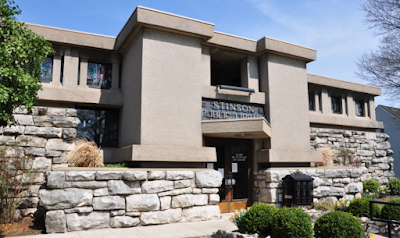 I noticed one day that the Indianapolis Marion County Public Library (IMCPL) search engine had a Holmes logo attached. Under the silhouette of Our Hero was the name SHERLOC. It stood/stands for Shockingly Easy Resource LOCator. The tagline was "Designed to take the mystery out of library searches." Unfortunately there is no Watson reference like that for them. There is another search engine (of sorts) that is used by another large entity you may have heard of called New Scotland Yard. It's named HOLMES - Home Office Large Major Enquiry System. It has now been replaced by the HOLMES 2, so it's still a win. Very cool, but, again, no Watson. 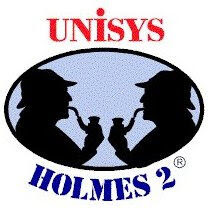 If we need a Watson fix, we'll have to go to IBM. They billed a particular creation (a supercomputer named Watson, actually) as the most advanced "question answering" machine. Sadly, it was named after Thomas J. Watson, Sr., one time chairman and CEO of IBM. There is some rejoicing to be done, though, in that his middle initial stands for John. I'll take that. 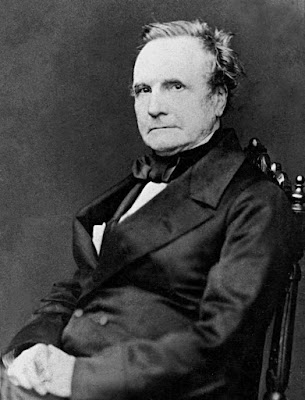 So, does any of this tie into the Holmes and Watson of Victorian London other than just the names? Well, it might be necessary to remember that Charles Babbage (above), the "father of the computer," was a Victorian himself. He died in 1871, but his legacy lives on in wonders like the IBM apparatus and Perseverance, and even though Holmes didn't give a whip about whether the Earth (or Mars) revolved around the Sun, you can bet his nemesis did. Professor Moriarty wrote about asteroid dynamics, and was a former professor of mathematics. Other connections can be made, though some of them are tenuous at best:

Babbage's father was a banking partner of William Praed. Praed Street in London is named after him, and it's where Solar Pons (a pastiche of Sherlock Holmes) lived at 7B. (The Praed Street Irregulars were founded by Luther Norris. Mr. Norris and I have a personal connection. I'll have to tell you about it sometime.)
Babbage went to school on Baker Street. He lived in Marylebone for over 40 years, even dying there.
And, like Holmes, he was interested in cryptography, and also refused a knighthood.

There might be more, but it would take some serious looking. Babbage was involved with, or was around, so many of the brilliant minds of the time, and Holmes would've had an appreciation for that.

Now, none of this has anything to do with chronology, but that's okay because it's these different lanes one must go down to seek out the information that might help in the quest. It would be easy to speculate that Babbage had some influence on Holmes or Moriarty...or even Watson. Half of Babbage's brain is on display at the Royal College of Surgeons having been donated by his son Henry. (I don't know exactly when, but Henry died in 1918, so it was definitely there when Watson was alive.) Some of the mathematics Babbage was involved with would have been covered at university, and Holmes likely read about them. But, again, it's all speculation. 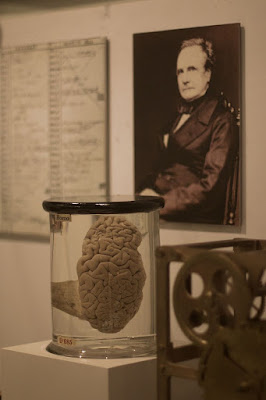 So, Holmes and Watson are now on Mars making a difference and remaining a pair in perpetuity. It's another bit of evidence that the partnership is strong and well-known, and will now be in places that the detective and the doctor could never have imagined. That brings a little Sherlockian smile to my little Sherlockian face.

Thanks for getting to the bottom. I'll see you next month, and as always...thanks for reading.

Posted by Historical Sherlock at 9:57 AM 2 comments: