Now for the second half of this wonderful paper. I love the fact that it was split perfectly in half when originally published. It's almost like it was created just to be a two-part blog post one day. I know it's a bit lengthy, and in today's hurry-up world it may be unsavory to read something so long especially when you might have only a slight interest, but I only put it on here because it seemed a perfect example of what someone like me does to satisfy that chronological itch.

I do have some qualms with the paper, though, but I'll let you continue reading before I bore you with them. So, back to it you go. Enjoy. 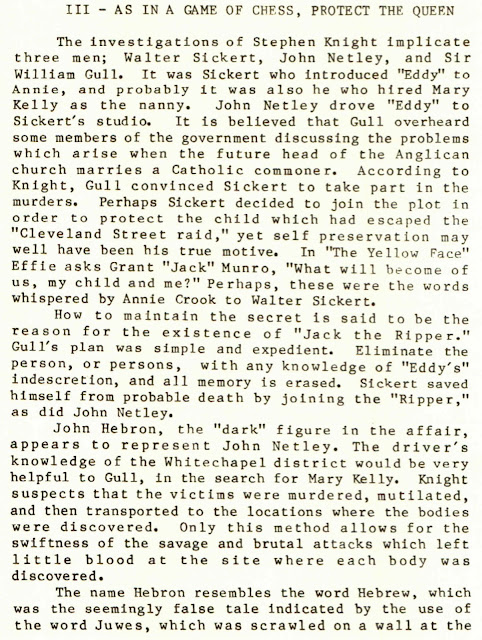 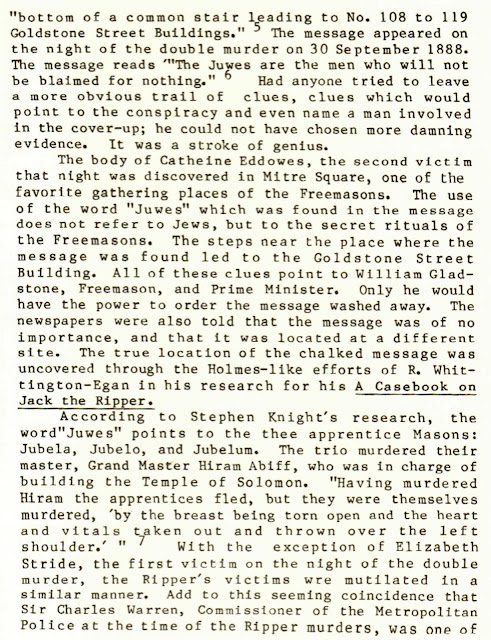 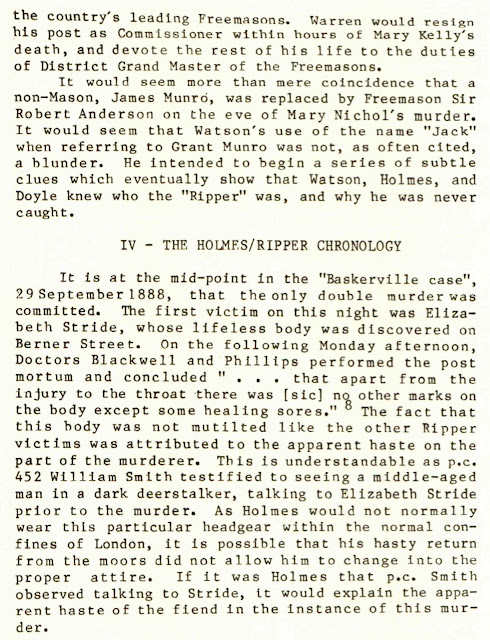 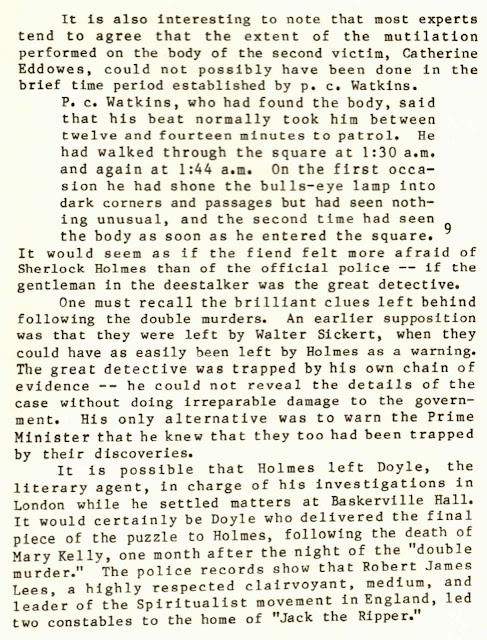 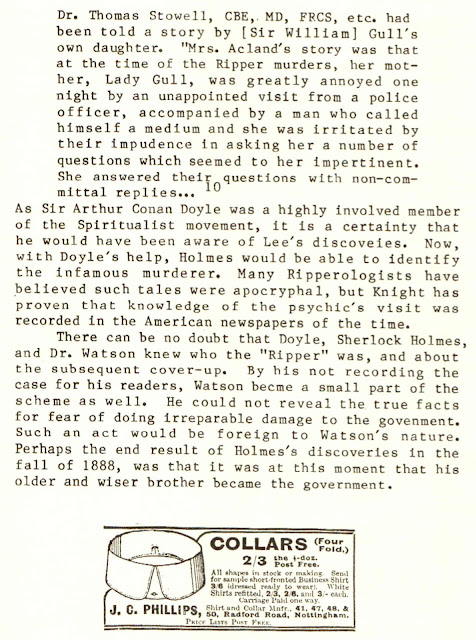 Well, there it all is. It's pretty convincing, but there are a couple of points I'd like to look at. (Oh, and did you like the collar advertisement at the end? I threw that in because it was actually there, and it's fun.)

First, I have always been intrigued by the Sickert part of the Ripper story. I don't believe he was the killer, but he had to have had some hand it in it somehow. There are just too many places where he pops up to not have been involved in some way. For the record, I believe the actual killer was named in this book: 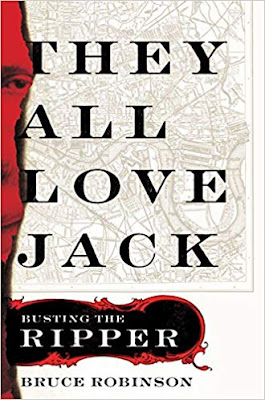 I won't give it away, but if you're interested in the Ripper case at all, then I suggest getting this (rather long) masterpiece. You won't be disappointed.

The other point that bugs me about this paper is that it ignores every other chronologist (and Watson - which is okay sometimes) when it comes to the time of year. Yes, the argument is good for it being later on the calendar, but that means all other evidence has to be ignored. The case is clearly in the spring, and this is what I've talked about before - examining everything about a story to find it's date. In this case, Bill doesn't do that: he only accepts a different date based on the research he's done, and does not try and correlate that absolute correct time of year to fit into his logic. I still like the paper, and will happily refer to it in future conversations, but only as a side note...not a definitive answer to the dating of this story.

I love what he's done, but more work would have to be done with the known facts of the details of the case before I would say this is an acceptable alternate date. 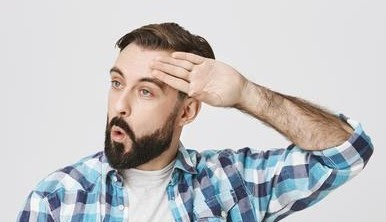 PHEW! Well, this has been a long one. I hope it was worth it, and that you enjoyed it. The great thing about all of this is that you don't have to hurry through it - come back to it another time. Look at all of it again someday. It's all about leisure and enjoyment. That's what I try and deliver, and I can only hope that's what you get out of all of this. I'll see you on Facebook, and right back here next month. I truly appreciate your time, and as always...thanks for reading.

p.s. At the request of one of you loyal readers, I am adding the footnotes page. I thought there were several, but there's just the one. (The other pages were something else.) Anyhoo, here you go. 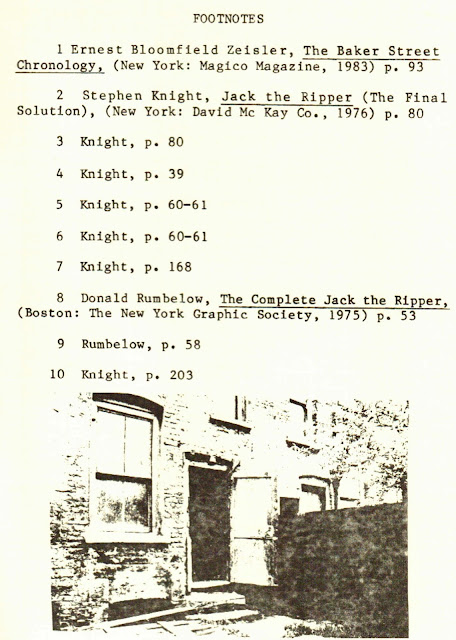 Posted by Historical Sherlock at 8:15 AM 4 comments:

I love historical mysteries. Subjects like the disappearance of Amelia Earhart, the controversial death of Ambrose Bierce, The Shakespeare Authorship Question, what ultimately happened to Thomas P. 'Boston' Corbett (the man who shot John Wilkes Booth), and the 1888 London murders of Jack the Ripper are my kind of reading. Now, Sherlock Holmes has been tied to Mr. The Ripper many, many, many times, and it can get tiresome, but every once in a while something falls into my lap which begs me to read it. That's what we're going to discuss today.

We are right in the middle of what you might call "Ripper season." The five "canonical" murders all occurred in 1888, with four in September and one in November. And given that Hallowe'en is creeping up on us, this seemed fitting. I am not trying to glorify the murders, nor take away from the victims, but merely show you a glimpse into a couple of my worlds - ones that are crossing over into each other. Let's get to the good stuff, shall we? 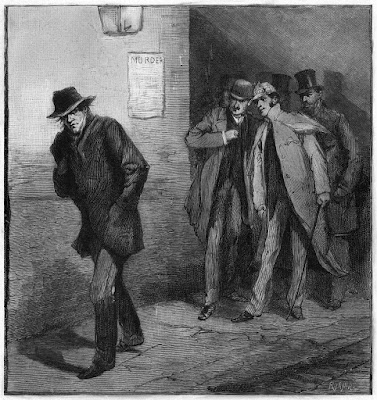 Back in 1986 a Sherlockian named William 'Bill' Cochran published an article in one of his society's publications. Bill runs The Occupants of the Empty House in Du Quoin, Illinois. (That's really close to where I'm originally from.) I contacted him and asked if I could use said article on my blog, and he graciously granted me permission. As such, I am going to simply put the entire piece on here for you to peruse. I have scanned all the pages (with my little hand-held scanner)(which will explain some of the small irregularities) and will just paste them here. Transcribing it would take too long, and I'm lousy at condensing things. 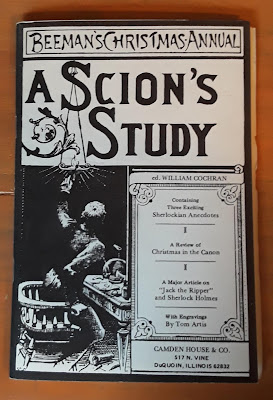 I'm going to do the first five pages now, and the other five in a couple of days. The amount of research that went into this is staggering, and it shows how deep a chronologist sometimes has to go in order to secure a possible date for a case. Bill is not a chronologist, but after reading this he is definitely an honorary one. Enjoy. 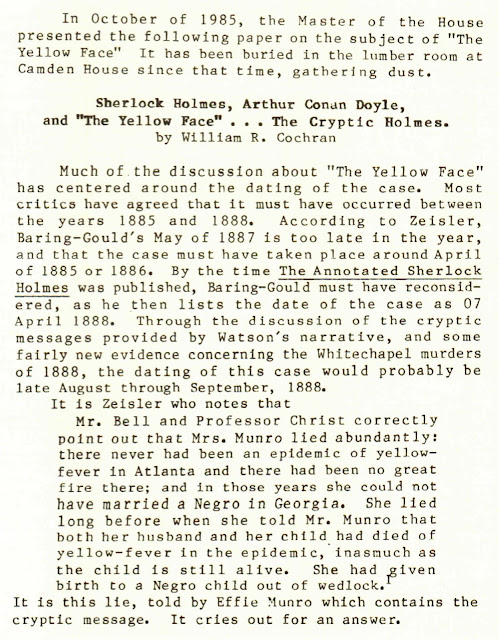 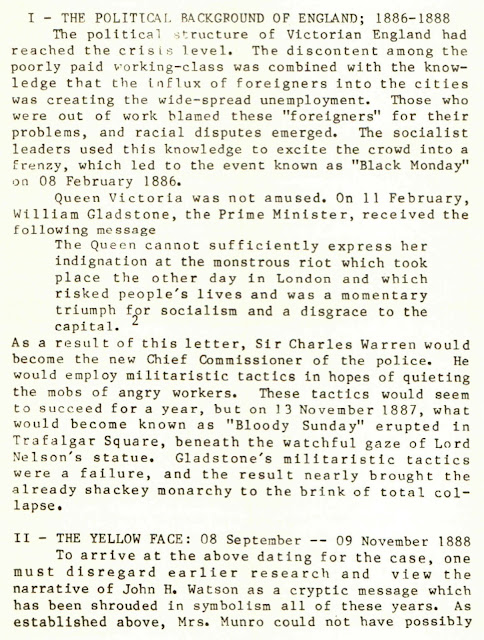 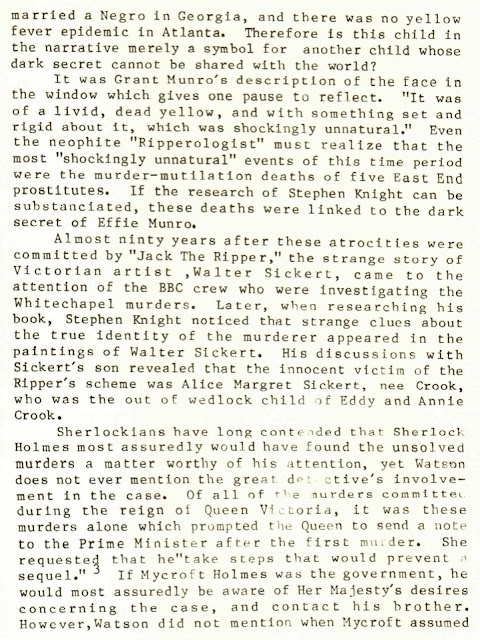 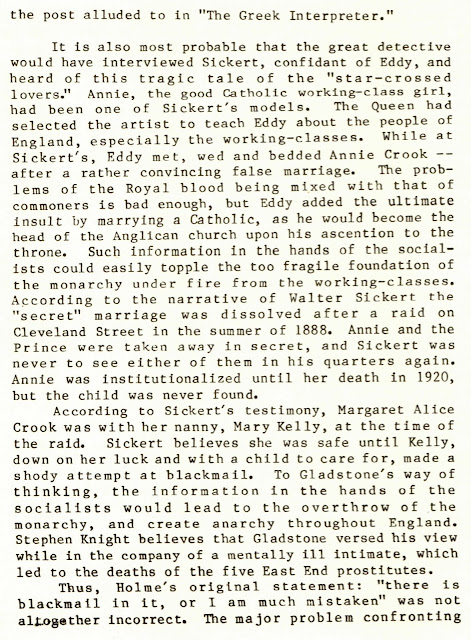 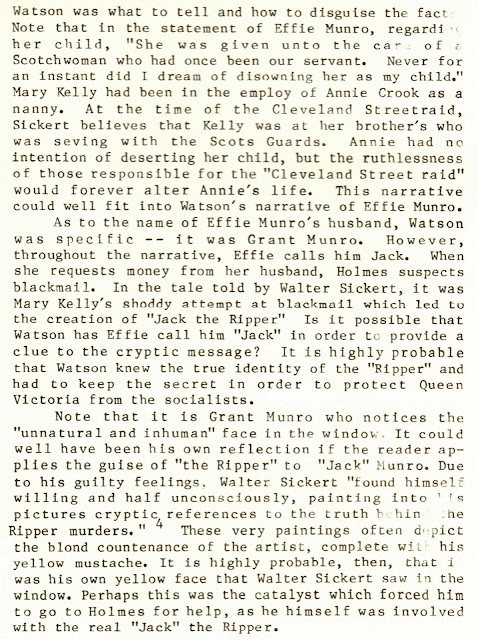 Intriguing, eh? And it gets better. We haven't even gotten to the chronology part yet. Again, I believe this is a great paper, and it really gives a sense of the "pains" people like me go through just to put a date to just one case. And there are 58 more! (I don't count 'The Mazarin Stone' [MAZA]. I'm working on a theory that it was merely a play written by Watson and not an actual case.)

I'll see you in a couple of days with the rest of the article, so be good until then, and remember that The Great Pumpkin is watching you. See you then, and as always...thanks for reading.
Posted by Historical Sherlock at 8:36 AM No comments: