The Thing That Happened, And Then Happened Differently, And Then Almost Disappeared Once

Lately I've been doing a lot research for a book that I intend to write. It's a book about chronology, and the research I'm doing is taking me to all sorts of old and new places. One of those old places has to do with a curiosity that affects "The Adventure of the Cardboard Box" (CARD) and "The Resident Patient" (RESI). It's something I haven't thought about in a long time, but now that I'm reminded of it we can discuss it.

Grab a copy of a "complete" Holmes book. Find the stories mentioned above and read the beginnings. Just the first couple of pages or so. You'll notice that something seems very familiar. The text appears to look exactly the same at one point. Well, that's because it is. Let me explain. (This gets a little confusing. I apologize.) 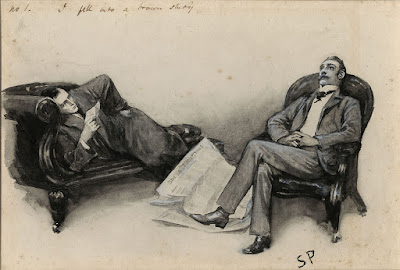 CARD was published in early 1893 in the Strand Magazine in London. When George Newnes, LTD. put out the first book edition (in London) in 1894 of The Memoirs of Sherlock Holmes it contained eleven cases. CARD was not included even though it had been one of the twelve stories that appeared in the Strand Magazine. When Harper published the first American edition it had CARD back in its rightful spot. Immediately following the publication of this book, however, was another edition from Harper that took CARD out again. It turns out Sir Arthur Conan Doyle had decided to exclude the story from any book because it involved an illicit love affair. It is believed that Harper didn't know about Doyle's decision before putting out the first version. Well, someone caught it, and a second version had to be rushed out. (They called it the 'New and Revised Edition' on the title page.) Personally, I would love to get my hands on one of the first Harper editions!

So, what does this have to do with RESI, you ask? Well, part of CARD was so good that a chunk of it was lifted and pasted into RESI. It didn't start out with the "mind-reading sequence" when it was published in late 1893. The fun part is that no one has any idea who decided on the changes. Was it Doyle? Watson? An editor? It's never been established. But, no matter - let's take a look at this mess. 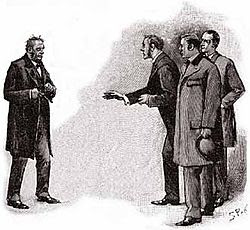 In your book, go to CARD. Read a few lines into the second paragraph. When you get to the part that says "through the fogs of winter." stop. It is from this point that the pasting begins. Now read all the way to the line "I should not have intruded it upon your attention had you not shown some incredulity the other day." That is where the pasting stops. All of what you read in between was taken directly from CARD. However, none of that was in the original publication in the Strand Magazine when RESI came out. What was in their first was this...

I cannot be sure of the exact date, for some of my memoranda upon the matter have been mislaid, but it must have been towards the end of the first year during which Holmes and I shared chambers in Baker Street. It was boisterous October weather, and we had both remained indoors all day, I because I feared with my shaken health to face the keen autumn wind, while he was deep in some of those abstruse chemical investigations which absorbed him utterly as long as he was engaged upon them. Towards evening, however, the breaking of a test-tube brought his research to a premature ending, and he sprang up from his chair with an exclamation of impatience and a clouded brow.

"A day's work ruined, Watson," said he, striding across to the window. "Ha! the stars are out and the wind has fallen. What do you say to a ramble through London?" 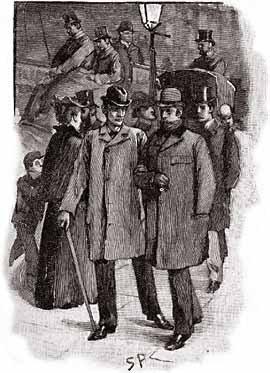 Now, when you look at CARD you'll see that Watson tells us that "it was a blazing hot day in August." But, in RESI, before the pasting, it says that "it had been a close, rainy day in October." There's no conflict here since the weather descriptions come before the mind-reading part of the text. There's no chronological problems between stories for the same reason. All chronologists believe CARD was in August (though the year and date is debated), and all believe RESI was in October (but again the year and date is debated).

It doesn't end there, though, because when the English publisher John Murray published a book in 1928 called Sherlock Holmes: The Complete Short Stories, RESI had been altered once more! Now the pasting was completely gone and the two original paragraphs from above were shortened to... 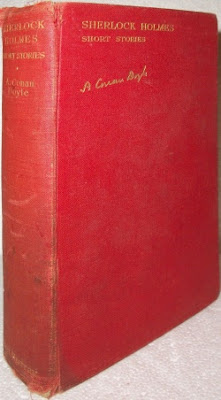 It had been a close, rainy day in October. "Unhealthy weather, Watson," said my friend. "But the evening has brought a breeze with it. What do you say to a ramble through London?"

So, basically, you could have any one of the different versions of the mish-mash between these two stories. Next time you're perusing your Sherlockian library, take a look and see which ones you've got. Either way, you no longer have to worry about coming across this anomaly and being confused. This post should cover it for you.
Posted by Historical Sherlock at 7:50 AM 1 comment: