Being gifted a book from a fellow book lover is a thing of pure joy. When others know where your passions lie and notify you when a tome suddenly jumps out of nowhere, it keeps the sunshine around for a little longer. This happened to me recently, and I'd like to talk about how this non-chronological title still holds interest for our journey here.

A friend of mine at the VA goes to a lot of book sales, and she will contact me when she finds something I might be interested in. She made a find not long ago on a relative's bookshelves, however, and let me know immediately. It's titled A Doctor Enjoys Sherlock Holmes. It was written by a man named Edward J. Van Liere in 1959. I was not familiar with it, and was thrilled. Turned out to be a first edition, too, but my friend was good enough to just hand it over even after finding this out. (Book people are the best.) 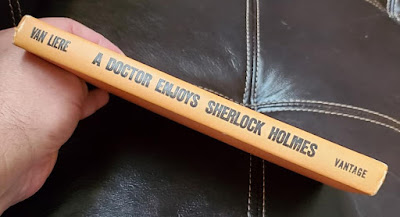 I've read it, and found that Dr. Van Liere talks more about Dr. Watson than Sherlock Holmes. I was stymied, though, to find him talking about different medical procedures and findings but without really tackling how they might actually fit into the timeline of The Canon. He references poisons, endocrinology, cardiology, genetics, surgery, and a number of other medical topics, but makes little to no attempt to place them into a Victorian timeline that could affect a case's dating. In fact, he goes entire chapters talking about medical advances without listing a year for them at all. 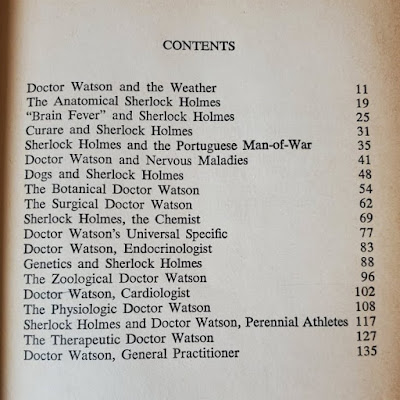 It's the first chapter, though, that may hold at least some interest. To a chronologist, weather in The Canon is a very important aspect of creating a date for a case. A large number of them have us looking at that very subject for help. Here again, Dr. Van Liere doesn't try and do anything with it, but merely talks about how much Watson talked about it, and how it may have affected their moods and the number of people coming through the door. So, let's see what he has to say about it, and compare it to what we know.
In the very first paragraph he says, "As far as I know, no one has emphasized the numerous references to the weather by Dr. Watson." Remember that this was several years before William S. Baring-Gould published The Annotated Sherlock Holmes and referenced the weather in just about every other sentence! The second paragraph talks (in part) about 'Thor Bridge' (THOR) when he mentions Watson noticing the leaves "being whisked away from the plane tree...which graces their back yard." This curiosity doesn't really help in the dating of THOR, rarely gets any attention from chronologists, and merely helps confirm the time of year. Personally, I think more work needs to be done on this passing remark as I think there's more to it. Maybe one day. 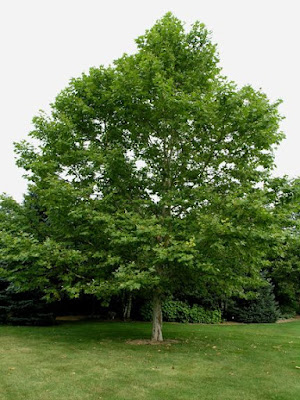 (The London Plane Tree - a close relative of the American Sycamore.)
He then speaks of The Hound of the Baskervilles (HOUN), but smartly doesn't try any dating. He only talks about the dreariness of the weather in it. The it's on to the rains mentioned in 'The Golden Pince-Nez' (GOLD) and 'The Resident Patient' (RESI). In that case we find "It had been a close and rainy day in October..." No argument from anyone on the month (many on the year, though), but newcomer A. R. Colpo does say it was late November. He bases his findings on the time of the sunrise Watson mentions, and since he does agree with 1881, he says the sunrise time indicates late November, not October.
From there he looks at "bleak autumnal evenings" in 'The Noble Bachelor' (NOBL). After that he goes into fog and all its problems in 'The Copper Beeches' (COPP) and The Sign of [the] Four (SIGN). But, in SIGN, he misses an opportunity to tackle one of the longest-standing chronological snags in The Canon. He quotes Watson with, "It was a September evening...and a dense drizzly fog lay upon the great city." The whole September thing throws a real pickle in the works as earlier in SIGN we hear it's July. So, chronologists are spilt - some say it was July, some say September, and some say it could be either. (Two say April, but that's too deep to get into here. Maybe another post.) 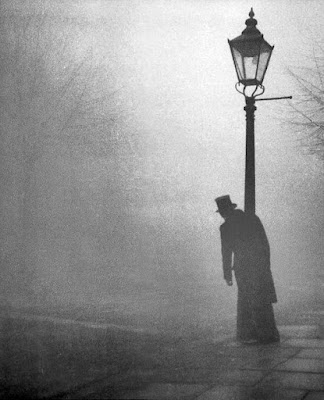 He keeps with the fog in 'The Bruce-Partington Plans' (BRUC), and the switches to winter weather and all it brings in 'The Blue Carbuncle' (BLUE). We then find him discussing 'The Abbey Grange' (ABBE), and refers to Watson describing "an adventure which took place on a bitterly cold morning during the winter of '97." All chronologists agree with winter 1897, but the question is which winter? The one at the beginning of the year? Or the end? Nearly all like the beginning, and some refer only to "winter 1897" without being more specific, but one person thinks it was the end of 1897.
He sticks with winter and talks about 'Charles Augustus Milverton' (CHAS) and 'The Beryl Coronet' (BERY), but merely adds them and their wintery descriptions to the lines about ABBE. From there he starts in on spring and includes 'The Copper Beeches' (COPP), 'The Speckled Band' (SPEC), and 'Wisteria Lodge' (WIST), but then Dr. Van Liere makes a reference to His Last Bow (LAST) which is technically correct, but looks odd. Immediately after the line about WIST, he says...
"And in His Last Bow, Watson writes that he had recorded in his notebook that, in the latter part or March in the year 1892, it was a bleak and windy day."

Now, it sounds like he's referencing the wrong story, but he's really not. WIST does appear in the book His Last Bow, but it's hard to ferret out which he means here as he uses italics for even the short story titles. I'm using bold font for the short stories just to make them stand out, and italics for the book titles, but he doesn't. So...sort of an error. Sort of.
Staying in spring but switching to good weather, he lists COPP and SPEC again, but adds 'The Three Garridebs' (3GAR) to the mix. After that he talks about the summer heat in 'The Greek Interpreter' (GREE) and 'The Mazarin Stone' (MAZA), adds in 'The Cardboard Box' (CARD) and then a correct reference to LAST when Watson talks about it being a "hot night on the second of August." The next section gets into barometric pressure being spoken of in 'The Boscombe Valley Mystery' (BOSC). 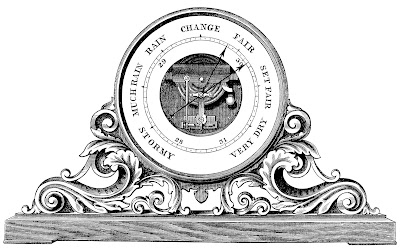 Finally, he asks the question - "One might well ask why Dr. Watson emphasizes the state of the weather so often?" He lists the following reasons:
1. "To make the setting of his stories more realistic." (This tells me Dr. Van Liere may not have been a complete believer in The Game.)
2. "To take up space in the manuscript." (I'm not sure what to think of this one. Did Watson get paid by the word? There was no set word count for the cases, and Holmes hated the way Watson padded his writings with what he saw as unnecessary fluff, so this one leaves me hanging.)
3. "To use the subject of the weather as an excuse for some fine writing." (Again, Holmes hated that kind of stuff, and Watson would only inflame him more if he did it, so is this a valid reason?)
4. "To reveal Watson's little-suspected love of nature." (Hmm...maybe.)
Dr. Van Liere goes on to examine each of the above. For the first one he reasons that other writers like to make bad weather go hand in hand with dirty deeds, but Watson doesn't too often. He does state that Watson did "occasionally take advantage of unusual atmospheric conditions to make the story more exciting." He cites how he and Holmes used the fog and low visibility on the moors in HOUN to attempt to catch Stapleton red-handed. 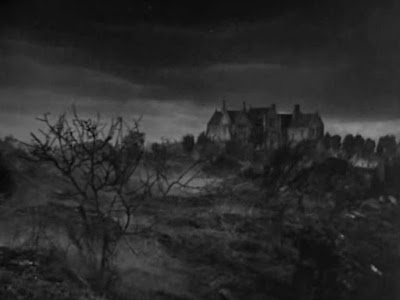 He then dismisses the second reason stating that Watson wouldn't pad his manuscripts. He also discounts reason three, but does offer an example a rare moment when Watson does use weather to beautify a story by mentioning the line from 'The Five Orange Pips' (FIVE) about how "the wind cried and sobbed like a child in the chimney."
He finishes by saying that physicians who make rounds and house calls take little notice in the weather as it doesn't stop them from doing their duty. He cites 'The Crooked Man' (CROO) with 'When your round is a short one you walk, and when it is a long one you use a hansom.' He concludes by saying that reason #4 - Watson loved the weather - as being the most likely. He says of him that he is "a lover of nature and one who could see the charm in all her moods."
The weather, as we know, is a HUGE part of decoding the dates for the cases. In fact, it may be the main one. But, as with all evidence, it isn't without fault, and oft times it seems other information goes against it even though Watson may have told us about what exactly was happening in the skies on a particular day. We have to allow for interpretation on his part. When he says sunrise, does he mean the recorded moment the sun came up, or the moment Watson first notices the sunlight? Same goes for sundown or dusk. Is what he sees and writes a given for the whole night? Or do storms move one, or heat slack off, or sunlight get blocked by the clouds for a bit? Do we take what he says for the whole day, of just the moment he looked up? It just goes on like that. And always will.
Well, another month means another post, and I am happy to have brought you this one. Hope you enjoyed it. I'll see you soon, and as always...thanks for reading.
Posted by Historical Sherlock at 8:57 AM No comments: