January And All Its Uncertainties

Welcome to the new look here at Historical Sherlock. I played around with a number of different layouts, fonts, colors, etc. until I finally settled on something simple and attractive. What you see before you is the final product. I hope you like it. (Let me know.)

Instead of doing some grandiose post that helps celebrate the new feel, I thought I would just do what I always did - talk about Sherlockian chronology. We are going to be talking about the month of January (since we're in that month) and make it sort of an adjunct or follow-up to the Posts over on Facebook which have discussed any and all daily findings of chronologists. Students of this part of the hobby will have noted that there were others who believed January fit into their timelines, but that weren't mentioned in the daily Posts. Well, there's a reason for that, so let's talk about it. 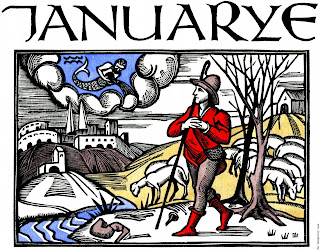 By my calculations, 16 different chronologists found that 6 different cases happened on 9 different dates in 10 different years in January. They, however, are the ones who found an exact date, and not just a general idea. Exact dates are the only thing I can track. (I did use a non-specific finding in my first Post, but I needed something to start with as the first actual date wouldn't have appeared until the 5th.) See, of the 20 or so chronologies I have, only one person went the extra mile to list an exact date for every story - Master Brad Keefauver. Several others come close, but most get tripped up in the later stories when Watson was less than forthcoming with data. It is these general findings that didn't show up on the Facebook dailies. That's what we'll look at now. (I won't be going into detail about HOW they got their findings, be it weather reports, Watson's marriages, etc. as that would take up way too much space and time here.) 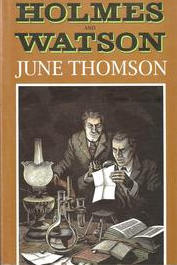 Of those who like January for a date, some go far enough to be fairly specific, while others were less so. Starting at the top of my list shows that June Thomson thinks that 'The Adventure of the Second Stain' (SECO) fell in January of 1886. She is completely alone in this, but it's not unusual for SECO as it's one of those cases that doesn't have a lot of agreement. Some think it was in March, some in July, and a few in October. Thomson's chronology is filled with a lot of generalities for cases, and she isn't known for being terribly specific.

Next would be Chris Miller and Mike Ashley's findings for 'The Adventure of Charles Augustus Milverton' (CHAS). They like January, but disagree on the year. Miller says 1886?, while Ashley says 1887. (That question mark actually appears on Miller's list. Apparently he wasn't convinced. Oddly, question marks at the end of dates is more common than you'd think. It's somewhat confusing, then, when you read in the introduction to some of these works and find the words "complete chronology.") Rounding out this case is June Thomson. She likes 1899 for CHAS, but again with no date.

Miller and Ashley do get together for The Valley of Fear. They both like January of 1888, while Gavin Brend thought it took place 12 years later in 1900. 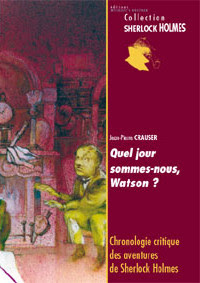 It was this month in 1893 where Jay Finley Christ places 'The Adventure of the Red Circle' (REDC). Meanwhile, Jean-Pierre Crauser thinks it could have been 1895. (I say "could have" because he also thinks it could've been February.) Roger Butters, along with Brend, like 1896, and Harold Bell says 1897. The chronological team of Alan Bradley and William Sarjeant felt it fell somewhere between November 1902 and March 1903. (I only include that here because January falls in there. Including it here shows just how hard I am trying to be thorough. Unfortunately, there are dozens of findings with ranges like this from about a dozen chronologists. Makes my job a little harder.)

A lot of folks like January for 'The Adventure of Abbey Grange' (ABBE). Bell, Thomson, Brend, Butters, Crauser, Ashley, and Martin Dakin are good with 1897, while John Hall goes a little farther with "early January" of that year. Ernest Zeisler thinks it happened between the 15th and 25th, but doesn't nail it down any more than that. The only other somewhat specific finding was from Henry Folsom who likes "late" January. 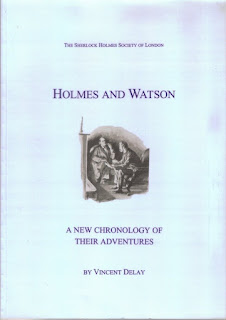 January of 1903 is also the year Folsom places 'The Adventure of the Three Garridebs' (3GAR), however he is the only one. Everyone else places it in 1902, and none past June of that year.

And wrapping up the findings takes us to one of the very last cases with 'The Adventure of the Blanched Soldier' (BLAN). Bell, Thomson, Brend, Dakin, Hall, Butters, Folsom, Ashley, Delay, and T.S. Blakeney all like 1903.

January could be a month where other cases fall, but the only evidence we have of this is from those who could do no better than a range of years. For instance, Mr. Blakeney says that 'The Adventure of the Beryl Coronet' (BERY) falls anywhere from 1881 to 1897. Therefore, any month or date would suffice. Those are the kinds of things I have left out of this post.

To reiterate...all of the above listings were the ones I left out of the Facebook Posts. They were for dates that were nailed down. All of these are hardly that. What bothers me about them besides being a pain when trying to work out a spreadsheet with all of the info, is that it doesn't really seem as though these folks tried. If you are going to sit down to write a chronology, and you've done all of the work for it, then it behooves you to at least attempt to be more specific. However, they weren't and as such their loose ends have to all be lumped together like this in a way that completes the month.

February will find us looking at this same kind of thing. That is unless something else comes up...and that's always a good possibility.

You'll have noticed that I don't make mention of Holmes's birthday here. That is a subject for another day, one that will take up it's own post. I do have some thoughts on it, as do many of the folks mentioned here. Maybe we'll talk about it next January, or in the month where I think it actually happened. Thanks for reading.
Posted by Historical Sherlock at 4:23 PM 1 comment: