Swimming In A Box

"She is the daughter of old Tom Bellamy, who owns all the boats and bathing-cots at Fulworth. He was a fisherman to start with, but is now a man of some substance. He and his son William run the business." - LION

Out of all of the things mentioned in the above passage, can you guess which we'll be discussing? Yep. Bathing-cots. What's a bathing-cot, you ask? Well, a very curious item that had its heyday and then just kind of faded away. It also happens to be one of the items mentioned only once in The Canon. Let's take a look at them.

Bathing-cots, also known as bathing-machines, were a fixture at beaches all around England and the world during the very prudish 1800's and early 1900's. Women and men were not to swim (or bathe) together at swimming locales, but with the women's rights movements that was to change. However, even if there were to be co-ed beaches, it still wasn't proper for ladies to be seen in their swimming outfits. So, a compromise had to be reached. Enter the batching-cot. It allowed women to swim at any public beach, but in private. Basically, it worked like this: the ladies entered the bathing-cot, changed into the proper attire, and then an attendant or team of horses would pull or push the carriage into the water. The people inside could enjoy the water, but away from the eyes of everyone. 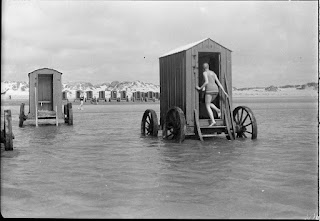 Dimensions for them were different, but most were the size of a modern-day bathroom or walk-in closet. Often they were of wood construction, but some were canvas stretched over a frame. Two axles supported the four wheels, and often there was a hitch for the horses to be attached to. Very simple. Larger wheels were often preferred as it kept the cot from moving around in the tide too much. Later, smaller and heavier-made ones were used for the same purpose, the drawback being that it would sink into the shifting sand. 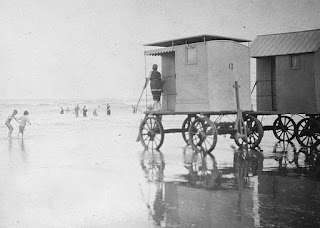 As they became more popular there started to be variations. Family-sized versions were built to allow mom and pop and the kiddos time to frolic. Some were built with small porches or stairs, and others were designed by wealthy patrons and featured curtained windows, gables, skylights, ornate metalwork, etc. (There was one built on 1908 that surpassed all of these. We'll get to it soon.) Often the outside of the commercial versions was very plain, but sometimes they were painted with stripes or decorated with fancy roofs.


Other variations included rounded-style main bodies, large canvas chutes on the back that extended to the water so people could actually get out and into the water, but still in privacy, and fenced-in areas. In the nothing-has-changed category, you could always rely on companies to find a new place to advertise. Bathing-cots were no different. I found images showing that Beecham's Pills had a large part of the market, but here we see one from Pears' Soap. (Often the ad painted on the side was for the company that owned the cots.) There was a society formed in London in the 1890's that had members that refused to buy anything advertised in public places, thinking it a blight on their city walls and transportation. However, that group doesn't seem to have been very successful or well-attended. 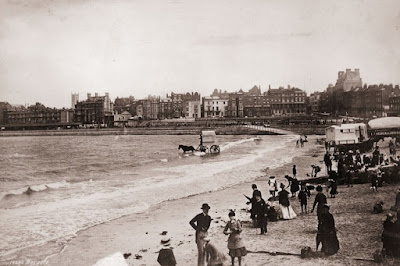 These craft were invented in 1750 by a Quaker man named Benjamin Beale in Margate, Kent. Recall that Leonardo the strong man died while bathing near there in VEIL. He would have seen many bathing-cots as they had been a staple on beaches there for about 140 years. This photo shows one being pulled into the water by a horse at one of the actual beaches near Margate - perhaps even the one ol' Leo died at. It is obviously a single-person model judging by the size and the fact that only one horse is being used. Larger ones can be seen on the beach.

Notice the wagon with the advertisement on the far right of the above photo. It is for the company of Hancock & Jordan. I know the picture was taken on or before June 1, 1897, as that was the day their business was dissolved as you can see in this notice from The London Gazette of that year. Chronologically that works out quite well as none of the major chronologists place VEIL past late 1896 (which is what The Canon tells us, as well). 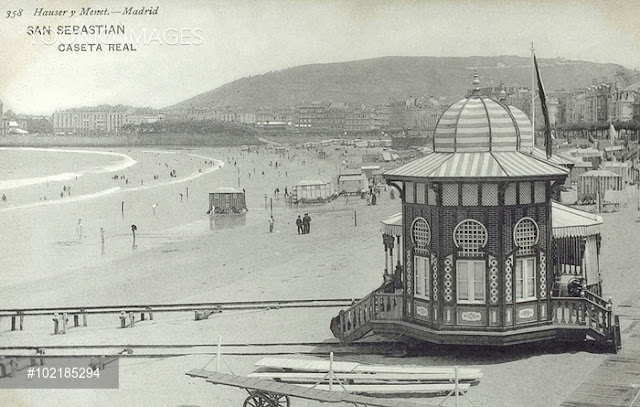 That cart that was built in 1908 that I referenced earlier was one that surpassed all others in size, functions, and decoration. It was an incredibly ornate model constructed specifically for King Alphonso XIII of Spain. He had been a king since birth as his father had died while he was still in the womb. He led an extravagant life, and no expense was ever spared for anything. In 1908 he had a bathing-machine made for him, his English wife, his children, and the Royal party. It was located in San Sebastian, Spain, on Ondaretta Beach. A steam engine pulley system pushed it into the water and also back out on a specially-built rail system. It was large, beautiful, and totally unnecessary. It was torn down in 1911. 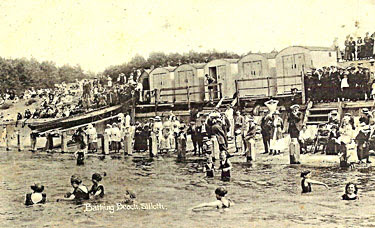 In time these cots became obsolete and unnecessary, at least for their original use. Beaches around the world changed to co-ed, and women's bathing suits were slowly gaining acceptance. Most didn't get thrown on the woodpile, though, but had the wheels removed and became bathing huts. They made perfect changing rooms. Others were rolled away to be used as tool or storage sheds, and some were undoubtedly disassembled or thrown out. Quite a few went out to local farms to be turned into hay carts or something similar. 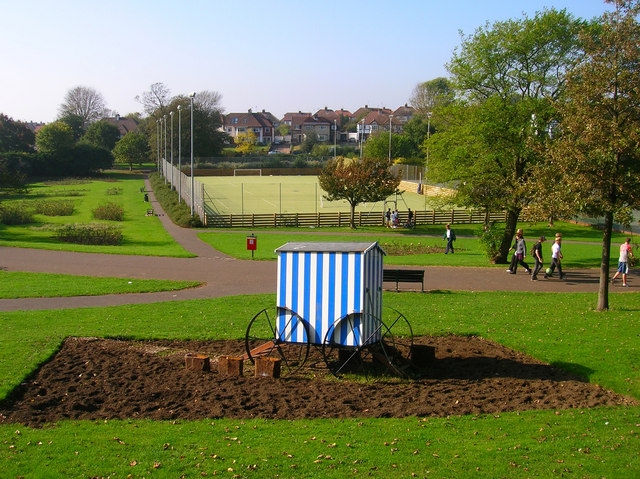 Some of them still survive today, but almost always as tourist attractions. They can be found on beaches or beachfront attractions around the world. Often they are completely restored, but others are shown just as they were after decades of use in the salt water. So, it is possible to get see an original bathing-cot from the time of Holmes and Watson if you do a bit of research.
There are hundreds of photos of these that can be found with a simple internet search. Unfortunately space won't permit me to show them all. Take the time to look at the history and use of these simple machines. It's a fascinating curiosity that isn't given much thought nowadays. Personally, I love finding things like this, and I truly hope I can bring you something just as cool again next month. Til then...
Posted by Historical Sherlock at 5:49 PM 2 comments: