I have had the good fortune to write a column for The Illustrious Clients Newsletter since October of 2005. And with the exception of about a dozen times, I have had one in there every six weeks like clockwork. (The missing ones were either due to editor error, or were left out for space reasons.) The publisher has always allowed me to send in articles whenever I felt like it to be used when they needed something, kind of like a filler piece, and I have obliged them many times. One of the pieces I wrote back in August of 2014 was used, and it centered on a word that caught my eye in 'The Adventure of the Solitary Cyclist' (SOLI).

In SOLI Big Bob Carruthers uses the word "Lord" no less than four times. He was a passionate man, apparently, as a number of things he says end with exclamation points. The one I'm interested in here is the last word of the following passage:

Jingo. I assumed it was a god of some kind since it was capitalized, but I had never heard it before. So, I did what I do all the time and researched it. Turns out the origins of the word are terribly uncertain, but the use of it is based in Christianity.

Jingo is actually a stand-in word for God, or Jesus. It’s a minced oath that can be traced back to the 1600’s, and became popular in the 18th and 19th centuries. The whole phrase is a substitution for the phrase “by the living God.” Ann S. Stephens used it in a phrase that translates from German as "but with Jingo" in her 1851 work Jonathan Slick. 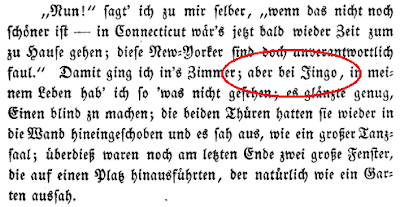 Bret Harte used it in several works, including in the same way that was used by Carruthers in SOLI. It also appears in some translations of Don Quixote, but oddly the word is not capitalized. 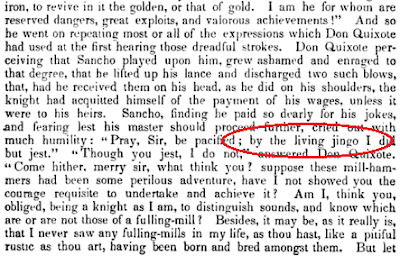 The origin for the word is debated. It might refer to the legend of St. Gengulphus (Gengu, for short = Jingo), or come from a book about magic printed in 1679, or it could be a Basque word for God (Jinko), or have something to do with the sacred Japanese tree the Gingko, or it could be related to the French phrase Je renie Dieu, but it became very confusing for me to follow that logic.

Regardless of its origin, it is not a usable word when it comes to dating the story. Etymology is a bit of a sticky point for chronologists. See, it should be possible to help date a case when an unusual word appears, but there's a problem with that: there's a chance that a word, term, or phrase may slip into a story that may not have been around when the events actually happen. Watson may have accidentally put in something that wasn't around when he wrote the original notes. He pulls out the story for publication, adds some romance and danger, and makes some revisions. One of those revisions may not have existed years before. It would be an honest mistake, but one that negates the ability to use this type of evidence.
Even though this type of thing really can't help us in our quest, it is still a curiosity none-the-less. And luckily I have over a decades-worth of these kinds of columns to draw from, so you can expect to see more oddities from our beloved Canon in the future.
Thanks for reading. I'll see you at the end of the month when we recap February's daily chronological findings.
Posted by Historical Sherlock at 8:29 AM