Life Between The Covers...

Our world is in a bit of a pickle right now. It's hard to know what's next, or how everything dealing with this pandemic will pan out. It's creeping into everyone's lives in one way or another, and it has mine. I've had a roller coaster of a month, and it looks like I may come out of it with a new health problem which may take some doing to tackle and control. But, I can still write about my hobby - just not about chronology this time. See, I have a book on my shelf I'd like to examine. Wanna take a ride?

I go out to Baltimore twice a year - both times for Sherlockian gatherings. On one of those trips I heard about this free book shop where free books were free. Did I mention the free books?! I've gone several times to The Book Thing, and I always come away with something. On one of those trips I found the item below. I already had one at home, but it was what was inside that made me keep it in my basket. 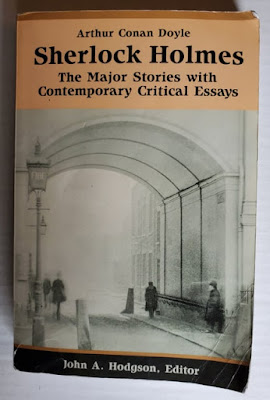 This thing had been loved. There are a lot of Sherlockians in the Baltimore area, but to this day no one has ever stepped up to claim it was theirs, or that they know who it belonged to. Whomever it was, I like them because they were serious about their study of the content, and of the world of Holmes. Inside the front cover was this... 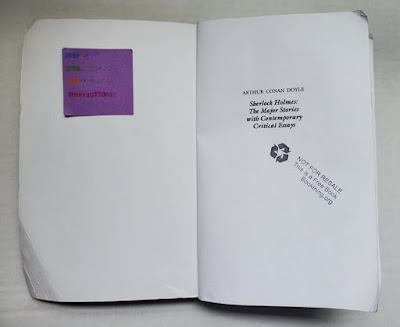 That little purple Post-It Note on the left is a legend. The words are all highlighted in a different color denoting their use on the pages.
Title - blue
Key characters - green
Summary - orange
Observations - pink

This is close to my heart because I did the same exact thing when I started dissecting William S. Baring-Gould's The Annotated Sherlock Holmes over a decade ago. I likely smiled at the familiarity, and then I remember closing the cover and not looking any farther as my intention was to take it to lunch with me - and that's exactly what I did.

The green highlighting started on Page 1 with the very first line. About a dozen pages later the other colors started being used. On Page 32 things got more serious. Not only was there the usual, now there was liner notes. Things were circled. Stars were next to certain words. On the corresponding page something was heavily underlined. My interest was at full tilt. 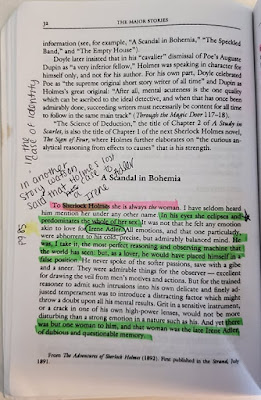 You see on the side where it says 'pg 85'? Right next to it is a yellow star. It's kind of hard to see, but it's next to the same line as the one that has 'Irene Adler' circled. So, I jumped to Page 85. There I saw two yellow stars and another highlighted line. This person meant business. Cross-referencing?! I thought I was in love. 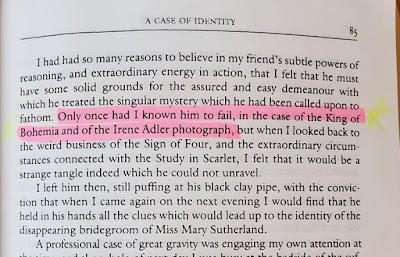 Less than ten pages later was another handwritten note. It was referring to 'The Boscombe Valley Mystery' (BOSC) and reads 'McCarthy and his son violent'. Several pages after that there was something new...bracketing! No longer satisfied with highlighting one line, now they were putting big pen marks along entire paragraphs. 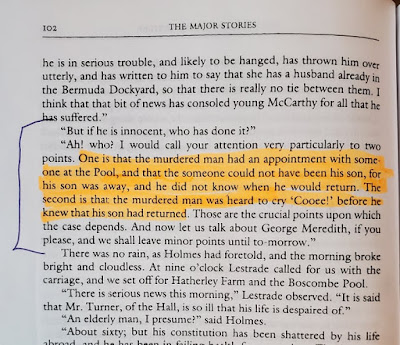 This all continued without much change until Page 214 when we find a different color of pen being used for the liners. This person had put the book down at some point and picked it up again later when a different pen was laying about. (Oh, and we'll get back to Page 214 soon.) On Page 286 I found something written in pencil. On Page 287 it went back to the original ink color. Then...on Page 381...something happened. A new thing. A new situation. The type of highlighter being used changed. 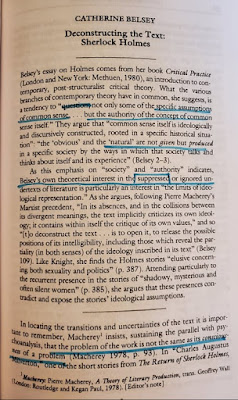 Things were now blocked differently. The color was a bit different. What was going on? On Page 386 I got my answer. On the edge of the page was another note - but it was in a different hand. Not only that, the type of bracketing used was also different. Suddenly, there was a new player. 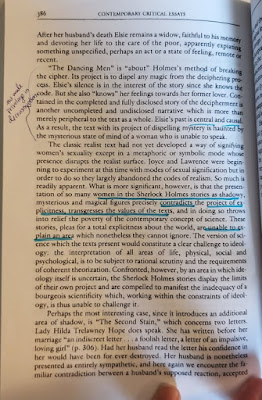 As I contemplated this my eyes were drawn back to the outside of the book and all of the various stickers that were present. Then it occurred to me: this was probably a college/university book. (I know...I'm a moron.) I knew why no one claimed this tome. I knew why it had different medias being used. I knew why certain stories were completely skipped ('The Musgrave Ritual' [MUSG] and 'Silver Blaze' [SILV] among them). But, it wasn't until today that I was able to have an aha! moment that would allow me to justify this post. Let's go back to Page 214. 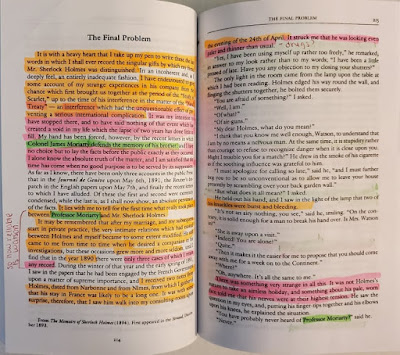 When I was thinking about this month's blog post I had finally decided upon talking about the dating of 'The Final Problem' (FINA) on April 24, 1891, and how it relates to The Valley of Fear (VALL) and all the (Moriarty) problems those two stories cause when held up next to each other. But, I couldn't shake the little guy on my shoulder telling me I'd already done a post about that, so I skimmed through some of my past ones but didn't see it. I started writing, and about halfway through I needed to Google something. When I punched it in a blog post of mine from 2018 popped up. I had done it before. Somehow I'd just missed it. So, I deleted everything and pondered a different idea.

Now, I haven't been well lately, and the thought of coming up with something new was a little daunting. I scanned my shelves, and this book jumped out. I didn't have a payoff for this post until I got to Page 214. There was my ending. There was the thing that would tie it all together. 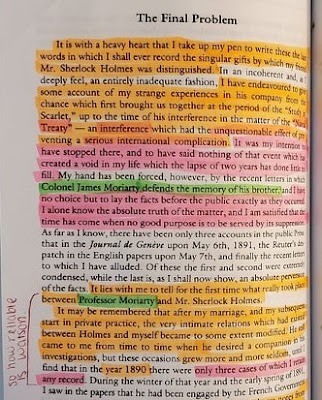 Page 214 is where the chapter on FINA begins, and two paragraphs down is where Watson starts talking about his marriage. Next to that, written in pink ink is the note 'So how reliable is Watson'. Trusting what Dr. John tells us was EXACTLY what I was going to write about in my first (now-deleted) post. It all just fell into place. With that I closed the book, wrapped up this post, and they all lived happily ever after.

On a personal note...
Should I get to a point with my health where I can no longer do this, or can only do it on a limited basis, I will let everyone know so that there's no trying to figure out what has happened. Right now everything is still being looked at, but I have a feeling I know how it's going to end up. However, I will be very transparent so that you all understand the situation.

I hope you enjoyed this fun little romp though another of my books, and I also hope I was able to bring a little sunshine to a dreary world. I'll see you next time, and as always...thanks for reading.
Posted by Historical Sherlock at 11:20 AM 6 comments: