London Smells. (Smells As A Noun.)

In May of 2018 I was interviewed for the podcast I Hear Of Sherlock Everywhere (IHOSE) - and I can't believe that was almost a year-and-a-half ago. Anyway, one of the things I talked about was getting down to the bare bones of a story. And I mean the absolute bare bones. A true chronology cannot be established unless every single piece of evidence is considered. By that I mean looking at all aspects of the life and times of Holmes and Watson. This post is going to look at one of the less-examined aspects.

A trip through The Canon reveals an awful lot about what The Two saw, heard, tasted, and felt, but smell doesn't come into play as much. Think about your own life - all the different smells one comes in contact with. We live in a world where most of these things are controlled pretty well, but during the time of Our Heroes it would've been very different. Things weren't quite as regulated, and some things had to just take over the olfactory sensors in the nose of anyone living in London. 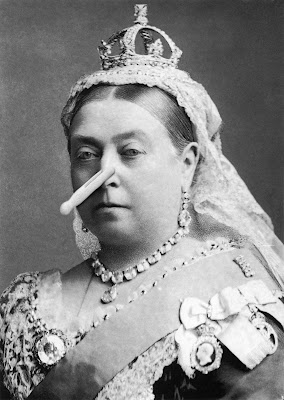 A tour through The Canon finds us dealing with smells and scents and such, and I made a list of most of the things I found. Here are some key words and what they were used with:

One of the things mentioned a lot in the cases is carriages - carriages that were pulled by horses or donkeys. According to Henry Mayhew (who wrote several books about the London poor), a horse produced as much as 42 pounds of manure a day. Multiply that by the tens of thousands of equines in London at the time of Holmes and Watson, and you can imagine how much horse exhaust littered the streets and ditches. The smell would have been overwhelming. Manure isn't mentioned (or even hinted at) in The Canon, so the problems it presented aren't tackled. But, anyone who lived in or near the city would have been very familiar with the stench. 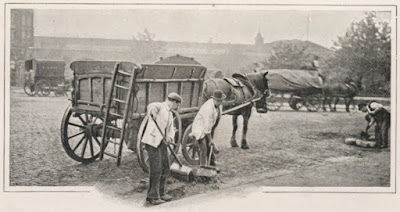 We also find no mention of dung or urine. I realize these things weren't exactly "nice" to talk about, but they were so prevalent at the time that it seems like they would make it in somehow. A presentation that I'm working on talks about the different types of road surfaces at the time, and one of them is the wood-paved version. These were used to help deaden noise, but they also soaked up a lot of horse pee over the years. That smell, mixed with the other, had to be something to behold.

Another thing to take into account is the growing population. More people means more smells...if you know what I mean. Since you know where I'm going with this, I'll go no farther, but it's just another thing to add to the smell mixture. (For the record, poop is mentioned twice, but both times in reference to ships.)

So, what does this have to do with chronology? Quite a bit, actually. London was expanding at an incredible rate, and the amount of construction alone would change the face of the city for decades to come in a palpable way. (We didn't get the term London fog out of thin air.) (See what I did there?) Buildings, new streets, parks, cemeteries, tunnels, sewers, railroads...there was so much going on. Each of these things has a timestamp, and so does each of the cases. It's my desire to find out where they might intersect and see if it can help in dating a story correctly.

This is what I am always chasing. I want to know everything about London at the time of Holmes being in practise. Luckily the info will never run out. There's so much to learn, and new data comes to light pretty regularly. Happily, there are thousands of books and publications from that time to mine nuggets from. This is where my brain goes when the Holmes's fires are burning. I am studying train schedules, building layouts, lamp post designs, cabmen licenses, newspaper rates, women's rights, asylum lunch menus, marriage laws, construction locations, clothing styles, pavement types, telephone locations, typewriter fonts...you name it. 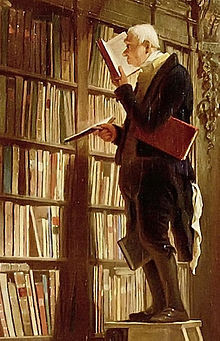 I want to know what Holmes and/or Watson would've encountered (with any of their senses) the second they stepped outside. What would they have see when they looked right or left? What kind of smells would hit their noses? What kind of sidewalk would've been under their feet? What kind of machinery did they hear? Would the air have been so thick with something they could actually taste it? I want to know it all. And I do not intend to stop. Right now in my Favorites menu I have over 60 different websites and blogs that I check into occasionally to look for things to research and hopefully cover on here or Facebook.

To wrap this up I'll give you an example of what I'm talking about. I have a separate file for pictures of Baker Street, and so far I'm up to a few dozen. I've also collected numerous sources for construction on the Fabled Street that cover road expansion, curb alignment, renumbering, etc. It is my hope to know everything about just that one small place in the London universe, and it will take decades to accomplish. Again, that's just ONE spot from the time of Holmes and Watson. (Though an important one. *wink*). 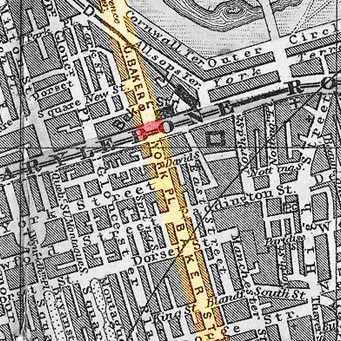 The search goes on, and it all has to be done around a regular life. So, if you'll excuse me I've got research to do. Lots of it!

I'll see you next month, and as always...thanks for reading.
Posted by Historical Sherlock at 9:37 AM 5 comments:

When The Long-Gone Become The Long-Awaited

People have often given me things for my collection/library. Sometimes it's one item, other times it's boxes of them. One of the things that always seems to find its way onto my shelves is newsletters. Or pamphlets. Today we're going to discuss one or two of them, and take a look at how they can help guide an idea.

I've been re-evaluating my collection recently, and I have found that I have these things by the boxful. I have well over a hundred just on one bookcase, and I've no idea how many more are in boxes waiting to see the light of day. Most are the monthly or annual publications of a society, but some are the work of an individual. If I ever get around to categorizing them I can be more specific. For now I'll just say that it can be fun reading either one. 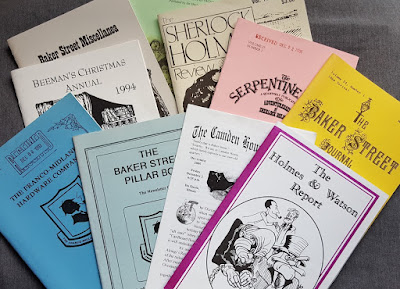 Now, I've flipped through a lot of these, and I'm always pleased to come across an article about chronology. Usually it's about a particular story, and not a full chronology. Usually. However, a few years ago (Autumn 2014, actually) a piece was published in The Baker Street Journal (BSJ) that helped me see a major chronological issue with fresh eyes. It was by imminent Sherlockian Les Klinger, and was a full chronology that was based on the dates that appeared the most for all the stories. An example would be for A Study in Scarlet (STUD). Nearly every chronologist says March 4, 1881, was the opening date, but not all. However, since that date is the most agreed upon, it is listed in the article as the best option for the date for that story. A young lady in my local scion society, The Illustrious Clients of Indianapolis, named Kera Martin pointed out a snag with the dates that would include Watson's marriage(s). We discussed it, and I had a blinding flash of light thought that I'm still working on to this day. 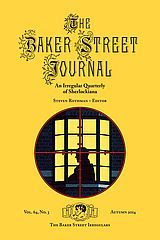 The BSJ is called the premiere publication for our hobby, but to me it's no different than any other. (I have a problem with any organization calling their publication that because it demeans and lessens the efforts and content put into others.) I have many of the BSJ run, but not all. I can get them, but don't seek them out. However, they do contain some really great chronological articles. I've spent quite a bit of time studying them, and hope that more appear in future editions.

Recently, a piece fell into my hands in a most unexpected way. I belong to a small, invitation-only group of Sherlockian cigar smokers based here in Indiana. We meet once a year, and have a fantastic time enjoying privately-branded cigars and then eating stupidly expensive food. It's so much fun, and this year's dinner found me receiving a highly sought after edition of a long gone publication called The Sherlock Holmes Review (SHR). 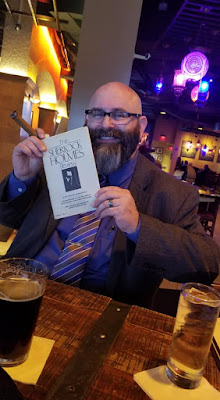 My friend Steve Doyle was the publisher of these, and he came across this Volume 1, No. 1 somewhere. He posted a picture of it on Facebook, and I mentioned that I would be interested in buying it. But, he didn't respond, and I let it go thinking it was either out of my price range, or he was going to keep it himself or put it in an important collection somewhere. At our cigar club gathering he surprised me by handing it to me as a gift. I was floored. I had not expected that to happen, and am still amazed by his generosity. 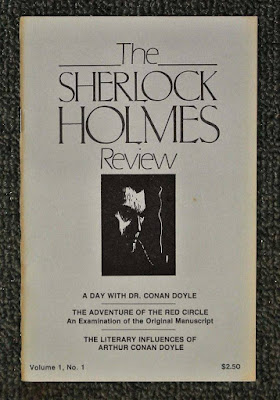 I had originally intended to put a post about this on Facebook, too, but I felt it was just too wonderful of a treat to lessen. (I'm just sorry I took so long to do this.) I have read the edition from cover to cover and loved every minute of it. And it turns out that the finding and posting of this item on said Facebook had an unexpected effect - it was part of a spark in interest in his no-longer-published labor of love that has resulted in a renewed want in the Sherlockian community for a return of Steve's baby. Sorry, that was a bit drawn out. Basically, The Sherlock Holmes Review is coming back! And I'll make sure not to wait so long to get a Volume 1, No. 1 of this run. 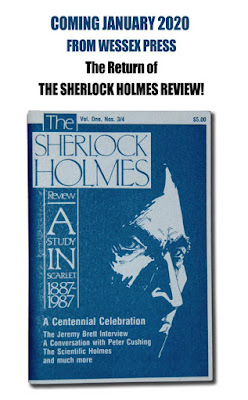 I realize this post wasn't really about chronology, but the next one will be. (I still owe you at least one more for the month.) So, enjoy this one as an appetizer. I'll see you next time, and as always...thanks for reading.
Posted by Historical Sherlock at 7:45 AM 2 comments: