Okay, this post isn't going to be about chronology at all. Well, I do kind of throw it in once, but for the most part this one won't deal with the Sherlock Holmes Canon much. What it is about is a special treat for you because this is something I never do: I'm going to let you in on one of the numerous Sherlockian "mysteries" that I work on whenever I can, but without success (so far). Basically, I want to see if anyone can come up with an answer to it. Or find more than I have.

I stumbled across this little problem some years ago and have never really satisfied myself with what I've found. Is it Sherlockian or not? Might be, might not be. And I'll appreciate your thoughts on it. So let's get to it.
To begin, I don't remember how I came across this. I am on Google Books a lot just flipping through publications from around the time of Holmes, so I probably just happened upon it. In the December 31, 1904, edition of The Graphic there was an illustration for a pantomime play that debuted on December 26, 1904, called "White Cat." Here it is: 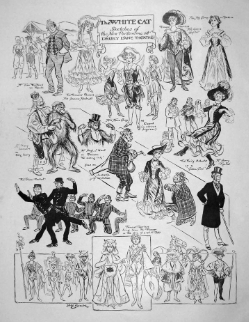 In the upper left-hand area you'll see a guy that sort of looks like he's dressed like Holmes. Pipe, deerstalker, and ulster. Here's a detail shot of him. 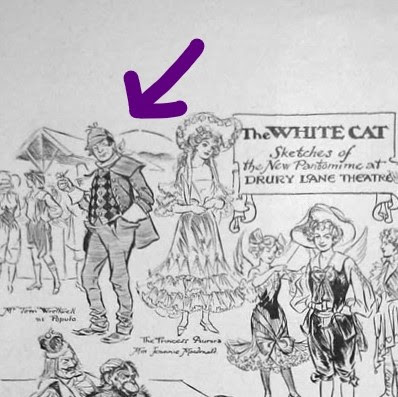 When I looked closer I saw that the name of the character is Populo, and the actor was named Tom Woottwell. I wasn't familiar with either of these names, so I dove into some research trying to find out if Populo was indeed supposed to be a Sherlock-type character. Unfortunately, I didn't find anything. I mean nothing. But, I persisted. I looked up info on Tom Woottwell and found out he was a pretty popular comedian around the turn of the 19th/20th century. He was also an actor and singer, and his music is still used in shows today. What I couldn't find was a picture of 'The Loose-Legged Comedian" (as he was called) except in costume. This caricature is about as good as it gets. 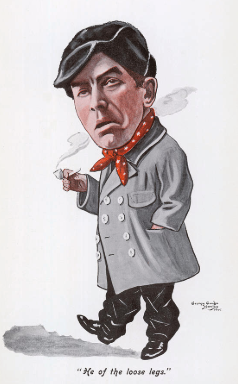 One of the things I discovered about him is that his last name was sometimes spelled as Wootwell. I also discovered that under that version of his name a secondary search option comes up in Google:

I looked at every single link under that and couldn't find one time that Woot(t)well was associated with Holmes. His name does appear in articles where Holmes is mentioned, but not together. And every time it was from a paper in New Zealand. (I should also point out that that Holmes option doesn't appear under the other spelling of his name.) While looking through those links I did find a picture of a his name being displayed on the Palace Theatre on Walthamstow High Street in London. (And even though it's spelled Woottwell on the sign, I found it while researching Wootwell. I dunno.) 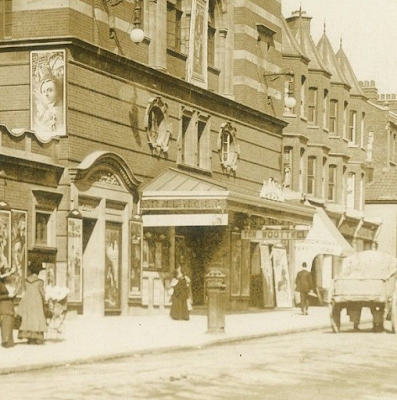 Anyway, back to the possible Holmes connection.
I kept looking and found descriptions of the play, but nowhere was there any indication of Populo being based on Holmes. (I also learned that for a little while the character was played by someone named Monte Elmo, and that the character was listed as Popula on occasion. There are other details I found, as well, but they don't really add anything to this mystery.) One day, while searching, I found a second illustration in The Illustrated London News from January 14, 1905, that featured the play, or bits of it. There he was again: 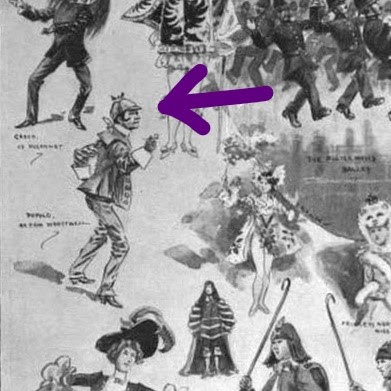 This doesn't really seem to help, though. Besides looking thinner, the character still kind of looks like Holmes, and kind of doesn't. That leads me to why I'm posting this: does this seem like a Sherlock-type character to anyone out there?
To further muddy the water, I found a (not so favorable) review of the play in the January 11, 1905, edition of PUNCH where the character is referred to as 'Coster.' (Another is referred to as 'Gorilla' but this is the only time I found these two character names associated with it.) 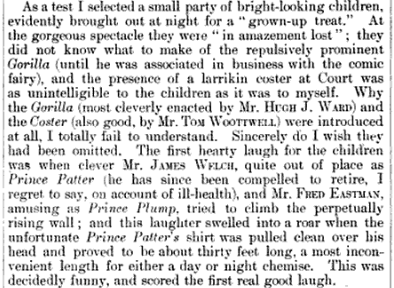 A coster (short for costermonger) is a street-seller of fruits and vegetables. See, no help. The term does appear in The Canon in 'The Red-Headed League' (REDH), but has no bearing on the problem. And if the Populo character is in fact a costermnger, he'd be the most fancifully-dressed one ever.
So, what do you think? I will probably do more research at another time since this is one of those little backburner problems that I pick up from time to time, but since they aren't about chronology I don't spend too much time on them. But I am interested in what YOU think. I think there's a good paper or presentation in this, but only if I can find out that the character is actually based on Holmes.
I rarely share these things because I like to find out the answers on my own, but I'm actually allowing you into my space on this one. So take it and run. If I don't hear from anyone about it I'll keep looking (someday), but I would like for all of you intrepid folk out there to poke around the archives and see what you can find.
Let me know what you come up with, and I'll see you next time. Until then...thanks for reading.
Posted by Historical Sherlock at 9:14 AM 2 comments:

Hello all. Got another of those articles from my chronological column archive. In all of the years that I wrote these I was able to come up with some pretty good arguments (I think) and this is one of those times. And I'm happy to say that in the 8 years since I wrote this no one has ever come up with the same answer.

It was January of 2010 when I wrote this. Inside this edition of my home society's newsletter is a picture of me with a moderately full head of hair, and just a mustache. Eek! (No, I'm not going to show it to you. Sorry.) What's bizarre is that I actually remember the meeting that we'd had about the story 'The Man with the Twisted Lip' (TWIS), and that I had already formulated my idea about the date prior to that. Having a date is great, but you have to be able to prove or defend it. So, after the meeting I got to work on it, and I think I did a fairly decent job of showing how I came up with one. Granted, it's no Pulitzer Prize winner, but it works for me. 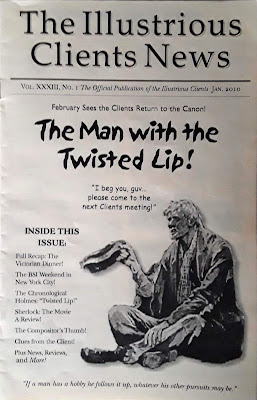 Many moons ago I dated 'The Musgrave Ritual' differently than anyone else ever had. I was afraid I would be ostracized by the Chronology Community, or worse beaten up by other chronologists at our big Chronology Conventions for being different. When I took up the challenge of 'The Man with the Twisted Lip' I once again found myself staring at an answer like before. It was simple and seemed obvious, yet everyone else had missed it. However, as I stated a few articles ago, much of what we do relies heavily on interpretation, so let's interpret.
The biggest pickle with the story is the way Watson says it was Friday, June 19, 1889. The problem is that that date was a Wednesday. Baring-Gould blames the typesetter for this and a number of other "errors." (He also blames handwriting, drugs, and not knowing exactly what time of the night it was.) He comes up with 1887, but Holmes mentions this year in conversation, a fact Baring-Gould just barely acknowledges by saying if St. Clair's children were conceived after the marriage in 1887, as per the proper Victorian custom, then 1889 is possible.
There are some things mentioned that do help my case. We read that it was "an exceedingly hot day," so we are likely talking about the middle of the year. And when Holmes and Watson head back to the police station after four in the morning, the sun was shining. Early morning sunshine in the UK? Still talking about the middle of the year.
There are also neutral items. First, the telephone at the station. By the late 1880's there were thousands of them all over England. And the appearance of Inspector Bradstreet is of little consequence, just like the other two stories he appears in. And due to the lack of info about the whens and wives of Watson's life we have to ignore it for now.
The only section of the tale that could cause concern was the route the Good Two take to Lee. "We have touched on three counties in our short little drive, starting in Middlesex, passing over an angle of Surrey, and ending in Kent."
Scholar Michael Kaser found that the Administrative County of London was passed into law on March 31, 1889, and when this happened, it replaced the Middlesex and Surrey parts of London. This isn't a problem, as people refer to things they are accustomed to and can take a while to change that. I grew up near a creek that everyone calls by the name it had 30 years ago even though it has a different name now.
I would also like to add that I don't think it matters what colors Holmes' dressing-gown was nor how it relates to his other ones. I have two robes myself, of two different colors. And Watson being called James isn't a concern, either. I believe that his middle name was Hamish, and that she called him the translated version. Everyone who knew may dad called him Gene, but his name was Edward Eugene. (Are you enjoying these extra special glimpses into my life?)
Anyway, on to that date. Now I am not going to play the blame game like Baring-Gould. My date does change one thing that Watson says but I won't try to explain it. I just know that the date he gives us of June 19, 1889 could be right, but since that wasn't a Friday, it isn't. However, if you look at the evidence you'll find that another date fits in every way...July 19, 1889. 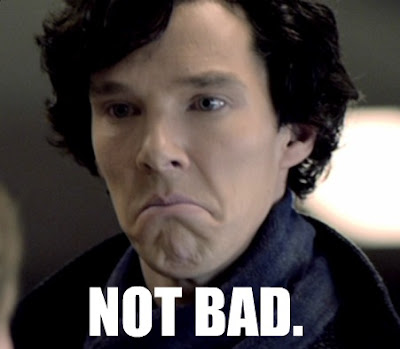 I also remember that at that meeting our group was treated to a special song called 'Hugh Boone.' It was set to the tune of 'Blue Moon' and was very cleverly done. (I can't seem to recall any of the words, but I know it got a lot of laughs.) And it was at a now-defunct restaurant. The building is still there, and it's now another eating establishment as is usually the case. My group has a history of shutting down eateries. 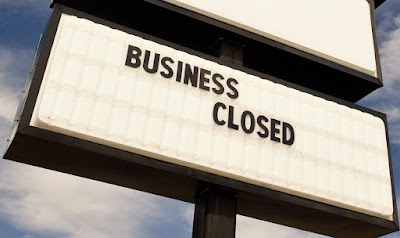 Well, there you go. I don't know what I'm going to do for another column this month, but I'll come up with something. Until then, have a great October...and thanks for reading.
Posted by Historical Sherlock at 9:08 AM No comments: