The 7th Month, and 7 Bajillion Details!

July is a great month for chronologists. Well, it's a great month for those who love the problems that go with chronology, but not if you're trying to construct one yourself. For me, the amount of information it holds is a goldmine. It has the fifth highest number of days in it that have some type of activity (17 of them), but it is the king when it comes to those who can't nail down a specific date.

So, now that we've talked about what isn't covered, let's look at what is. The only way to make sense of it is to break it down in list form. So, let's do that. And let's do it alphabetically. 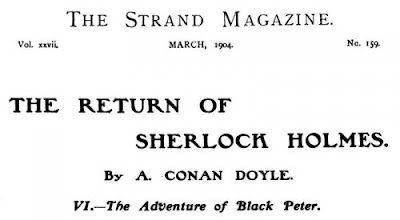 BLAC:
Gavin Brend, Roger Butters, Mike Ashley, and Edgar W. Smith all like July 1895 for 'The Adventure of Black Peter' (BLAC), but go no further.
Chris Miller and Craig Marinaro go a little further and say it was sometime early in the month.
John Hall gets specific and says it was the 2nd, while six others (H. W. Bell, J. F. Christ, T. S. Blakeney, William S. Baring-Gould, Vincent Delay, and the duo of Bradley & Sarjeant) say it started the next day.
Six others (Martin Dakin, Henry Folsom, June Thomson, E. B. Zeisler, Brad Keefauver, and Jean-Pierre Crauser) all say it was a week later than the previous six.

CROO
'Tha Adventure of the Crooked Man' (CROO) doesn't get much air time, but there are two entries for it.
Blakeney says it could've been in July of 1889, but he also says it may have been August.
Carey Cummings (the one with the incomplete chronology) says it began on the 17th.

DANC
'The Adventure of the Dancing Men' (DANC) has a lot of folks who place it this month in 1898, but they don't all say the same thing.
Thomson and Ashley go against almost the entire chronological community and say it was in July of 1897.
Dakin takes us back into 1898, but won't say when.
Miller and Marinaro go with late July of that year, while Hall and Roger Butters place it somewhere at the end of that month.
Brend, Bell, and Smith like anywhere from July to August.
Brad Keefauver gives the earliest full date with the 25th.
Zeisler, Christ, Baring-Gould, Crauser, and Bradley & Sarjeant believe it started two days later.
Meanwhile, Folsom says that happened the day after that.

ENGR
Miller and Butters go with a simple July 1889 for 'The Adventure of the Engineer's Thumb' (ENGR).
Brend and Blakeney can't decide between July or August of 1889, and Hall joins them in their indecision.
Crauser comes along, though, and nails it down to the 11th.

GLOR
For Holmes's first case, 'The Gloria Scott' (GLOR), Folsom places it anywhere from July to September of 1873.
Dakin and Thomson shorten a bit and add a year saying it was from July to August of 1874 instead.
Reliable Keefauver places it at the beginning of the month on the 3rd, but prefers 1880.
Baring-Gould kicks it back to an earlier time and puts it on July 12 of 1874.
Bradley & Sarjeant, who usually agree with Baring-Gould, correct him by stating it was in 1873...and on the 15th. 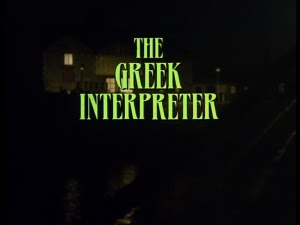 GREE
'The Adventure of the Greek Interpreter' (GREE) falls in July of 1890 according to Smith.
But Hall goes a little further and says it was late in that month and year.
Folsom is the only person to nail down an exact date with the 25th of July 1888.
Crauser tries to get specific and says it was July 30th of 1890, but he also adds it may have fallen in August.

LADY
'The Disappearance of Lady Frances Carfax' (LADY) is a late case, according to most, but how late depends on who you ask.
Smith says it happened in July of 1899.
Folsom says it was actually two years later.
Bradley & Sarjeant start the case on the 1st of the month, but in 1897.
Baring-Gould, though, says that's right, but five years later in 1902.
Keefauver sticks with 1902, but opts for the 26th. 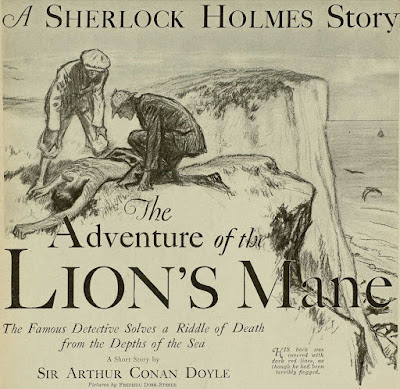 LION
One of Holmes's last cases, 'The Adventure of the Lion's Mane' (LION), is almost always placed in one the following discussed years.
Six (Thomson, Brend, Dakin, Marniaro, Ashley, and Smith) go with 1907, but no other date is given.
Miller agrees, and adds that it was late in the month.
Butters and Hall like late, as well, but says it was at the end of July. Basically, the same thing.
Bell kicks off the precise dating and goes with the 21st of July 1907.
Zeisler, Baring-Gould, Folsom, and Bradley & Sarjeant all like the 27th, but two years later in 1909.
Keefauver and Crauser take it back to 1907 and place it on the 30th.

MAZA
'The Adventure of the Mazarin Stone' (MAZA) is a heavily debated case, but two people place it late.
Smith likes July of 1903.
Crauser gives a bit more detail and says it was in June or July of that year.

MUSG
There is only one entry for 'The Musgrave Ritual' (MUSG), and that's for 1879. It comes from Miller, but there is nothing more added date-wise. 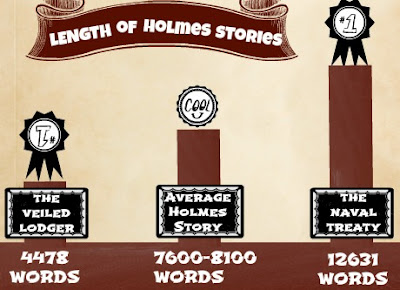 NAVA
In a tight span of just three years we have all twenty chronologists debating 'The Adventure of the Naval Treaty' (NAVA).
Brend, Butters, and Miller go with just 1888.
Hall agrees, and adds that it must have occurred after 'The Adventure of the Second Stain' (SECO).
Bell and Marinaro place the start of the case somewhere in late July of 1888.
Delay tries to nail it down to anywhere between July 26 and 31st that same month and year.
Blakeney, Thomson, Ashley, and Smith say it was in July of 1889 with nothing more specific.
Cummings tells us it began on the 13th of July in 1889.
Crauser says it was two weeks later on the 28th, and one year earlier.
Keefauver says it was the day after that, but jumps back to 1887.
Meanwhile, Dakin, Zeisler, Christ, and Folsom all like the 29th, as well, but take it back up to 1889.
Baring-Gould and the team of Bradley & Sarjeant say it was exactly one day after that.

NORW
'The Adventure of the Norwood Builder' (NORW) has only one entry for all of July, and that's on the 2nd in 1894 - so says Zeisler.

RETI
'The Adventure of the Retired Colourman' (RETI) is another late 19th century case.
Bell and Smith place it in July of 1898.
Zeisler and Ashley agree, but with a possibility of it starting in August.
Crauser gets specific with the 21st of the month, but in 1899.
Baring-Gould reels it back to 1898, and goes with the 28th. 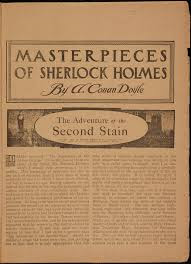 SECO
The aforementioned SECO is a very controversial case. Some people say there was only one, some say there were two with that name, and some say there were three. (We'll tackle why in a future blog post.)
Here, we're only interested in the dating.
Butters and Crauser go with 1888.
Hall likes that, but adds that it had to have occurred before NAVA. (See NAVA above.)
Delay goes a little further with a Tuesday in July of 1888, but doesn't say which one.
Marinaro goes broader and says it could've been in July of 1888, but adds that anytime in autumn works just fine for him.
Zeisler states that it was on the 2nd in 1889. Or the 9th. Or the 16th. Or maybe the 23rd.
Folsom also agrees it was an unnamed Tuesday in July, but says it was in 1889.
Christ gives us a full date of July 15th, 1889.
Keefauver likes that week, but goes with the 19th. And 1887.

SIGN
'The Sign of (the) Four' (SIGN) usually gets placed in March or May. But, some like this month.
Thomson, Hall, and Marinaro go with July 7th of 1888, but say it could've been in September sometime.
Brend and Butters like plain old July 1887.
Blakeney likes plain old July 1888.
Folsom goes out on a limb with the only exact July dating we have with the 17th, and likes 1888.

SILV
The only time 'Silver Blaze' gets mentioned in July is for the 12th in 1888. That is done by Zeisler.

SIXN
Five of the twenty chronologies I have collected say 'The Adventure of the Six Napoleons' (SIXN) happened this month.
Dakin, Bell, Thomson, and Smith all say it was in 1900. Hall agrees, but adds that it could've been anywhere from June to July. 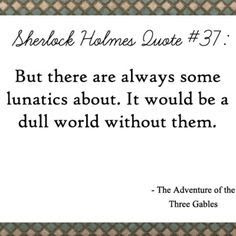 3GAB
'The Adventure of the Three Gables' (3GAB) might be considered one of the worst cases in The Canon, but chronologists still feel the need to date it.
Crauser likes 1902.
Thomson likes 1903.
Delay covers them both and says it could've been anywhere between July 1902 and November 1904.

Now you can see why I consider July so rich with data. It has a lot of variation, a lot of disagreement, and a lot of detail. Entire papers could be written about just this month, and lots of them probably have. Holmes and Watson, it seems, were very busy in July.

You've probably noticed that I only refer to the starting dates for the cases. Good catch. I know that's not the whole story when it comes to dating a case. There aren't too many cases that only last one day. Most of them last longer, whether a few days or a week or more. Well, that's something I'm working on. Turns out that the controversies with the beginning dates is only part of the story - the number of days, or length of the cases, is also very debated. Problem is, it's going to take some time to get all of that info together. When I do, though, we will talk about it a lot. *sigh* A chronologist's work is never done.

Thanks for reading. See you next month.
(Also, I think I may have the Comment problem straightened out. See it below?)
Posted by Historical Sherlock at 4:00 PM No comments: