One of the things that chronologists deal with is terminology. Just like today, a word or phrase can place you in a certain time. (I don't use "far out" much anymore, but do when I'm trying to sound really cool.) I had never really thought about this problem until one night at a meeting of my home society. I was discussing 'The Sussex Vampire' (SUSS) and how I had dated it differently than anyone else based on a particular word. (I discuss it below.) And that's when something happened which changed my chronological world...

A member mentioned that it might be possible that Watson could've used a word while editing that may not have been in use at the exact time the story events took place. That really blew my mind. If Watson waited years before publishing a story, he might've tossed in a current buzzword that wasn't around years before. Now, I know they weren't as common then as now, but it still happened. And the one from SUSS is a perfect example of it.

But, this post isn't about dating stories that way. It's about unusual words found in The Canon. I cover some of them in passing in a previous posts (which I know you've all read dozens of times), but I have a whole list of others to present today. (We'll do phrases another time.) So, let's get started. 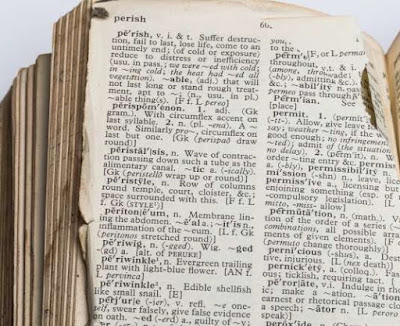 I used to have a Facebook Page called 'Bitterbumps and Hurry-Scurry.' It was dedicated to dead, unused, obsolete, archaic, and unusual words. Some of the ones on this list made it on there. Sadly, the Page is now gone, but my love of words hasn't waned in any way. I still love reading dictionaries just for fun, and always will. Anyway, let's start at A, and use the Canonical line that contains that word for each example.

"For God's sake, Ettie, let it stand at that!" he cried. "Will you ruin your life and my own for the sake of this promise? Follow your heart, acushla!"
This word appears several times in The Valley of Fear (VALL). It's an Irish term for darling or sweetheart. Similarly, macushla translates about the same way, and was featured in the movie 'Million Dollar Baby' (which I've never seen). It was also the title of a song from 1910, so it was definitely around at the time of Holmes and Watson.

"He jumped up when he heard my business, and I had my whistle to my lips to call a couple of river police, who were round the corner, but he seemed to have no heart in him, and he held out his hands quietly enough for the darbies."
...
"Just hold out while I fix the derbies."
The top line is from 'The Cardboard Box' (CARD), and the bottom one is from 'The Red-Headed League' (REDH). Each represents the only time both occur in The Writings, and they both mean the same thing - handcuffs. It's slang for the manacles, and both were used at the time. Kind of a unique situation for a term. 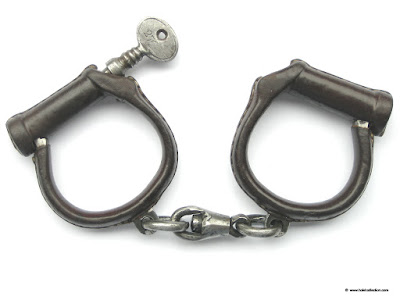 "A litter of empty tins showed that the place had been occupied for some time, and I saw, as my eyes became accustomed to the chequered light, a pannikin and a half-full bottle of spirits standing in the corner."
This word for a small metal drinking cup can be found in The Hound of the Baskervilles (HOUN). (A few lines later we hear of a 'tinned tongue.' Sounds lovely, but we won't be talking about it here...or showing any pictures.)

"These, though known for their valour and their breed, were whimpering in a cluster at the head of a deep dip or goyal, as we call it, upon the moor, some slinking away and some, with starting hackles and staring eyes, gazing down the narrow valley before them."
Also from HOUN, this one means a type of ravine or gully, but can be any type of depression in the ground.

"There was excellent wild duck shooting in the fens, remarkably good fishing, a small but select library, taken over, as I understood, from a former occupant, and a tolerable cook, so that it would be a fastidious man who could not put in a pleasant month there."
This one is from 'The Gloria Scott'(GLOR). It is a type of wetland. Over in 'A Case of Identity' (IDEN) you'll find a reference to Fenchurch Street. As you can guess, it is related.

"A worked antimacassar lay upon her lap and a basket of coloured silks stood upon a stool beside her."
Also from CARD, this one is a kind of cover used on chairs or sofas. A duvet or armcovers would be its equivalent. 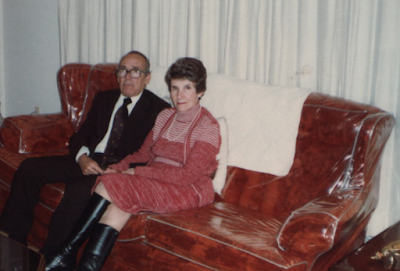 "It is an ordinary plumber's smoke rocket, fitted with a cap at either end to make it self-lighting."
A device used by plumbers that filled pipes with smoke so leaks could be found. They were also called smoke bombs. You'll find it in 'A Scandal in Bohemia' (SCAN).

"He'd had the quinsy and swollen glands when he was young, he told me, and it had left him with a weak throat, and a hesitating whispering fashion of speech."
This is a medical problem also known as a peritonsillar abscess. (Pleasent, eh?) From IDEN, it's basically tonsillitis.

"Vanderbilt and the yeggman."
Holmes mentions this when reading from his 'V' volume. It's one of the "unchronicled" cases. Mentioned in SUSS, as well, it is a word for a safecracker. (Or a burglar on a more basic level.) It's origin is debated, but I've read it's either Yiddish, Chinese, or Gypsy, which I mention below. This is the word that started the conversation I alluded to at the beginning of this post. I wrote about it way back in October of 2005, and posted that article on here in July of last year. Here's what I said about it...

The other problem is the first appearance of the word yegg or yeggman. Specifically it refers to a burglar or safecracker and it is most likely a Gypsy word or name originally meaning 'bomber.' Noting that the word refers to a burglar who cracks safes sloppily, perhaps by using poorly made bombs, solves the bomber/burglar problem. The first recorded use of the word in print is attributed to The New York Evening Post in June 1903. It became part of the British vernacular in or about 1900 but was around in the mid-1890's in the United States as a slang term. In a series of speeches given and published from 1904 on by William Pinkerton, of the famous Pinkerton Detective Agency, the word is used heavily and in one case was what the entire speech was about. Holmes would have likely read these accounts but not in time to set the date in 1897. As "yegg" did exist in street lingo prior to these articles it is possible for him to have heard it, maybe from the Irregulars. Even so, he probably would not have yet had it listed in his files and certainly not in capitalized form.

I eventually dated SUSS to November of 1901 based somewhat on the use of this word. But, if it's possible Watson used it out of time while editing, then you can't actually use it to help set a date. (I still like my date, by the way, regardless.) 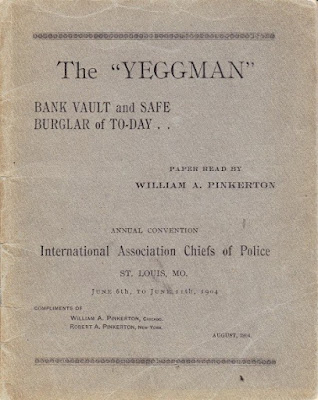 So, there you have some of the odd examples of terms in The Canon. I know this info is available in most of the reference books we have in our Sherlockian book collections, but as always I add my own little twists to it so it isn't quite so stuffy and academic.

I'll give a full report of my travels to Dayton for Holmes, Doyle, and Friends VI when I get back. (Well, early in April I will.) See you then. And as always...thanks for reading.
Posted by Historical Sherlock at 9:15 AM 2 comments:

Well, a month has passed and it's time to give away more stuff. Our last winner got her package and a little something extra. I'll put a surprise in with the next shipment, too. This post will give you details about the products, but also to introduce a slight change. See, my old logo featured a Peterson churchwarden pipe, and I would never be able to use it in any official way. (Also, the pipe was a new one, and didn't exist in Holmes's time.) I went online and found a true 19th century clay pipe, and thus changed the logo to be more true to what I do here. The new version is below.

This month's giveaway is for three books. All are books of novels by Arthur Conan Doyle - Sherlockian and non-Sherlockian. I have more than enough books about and by ACD, so I hope I can find good homes for the ones I don't need anymore. 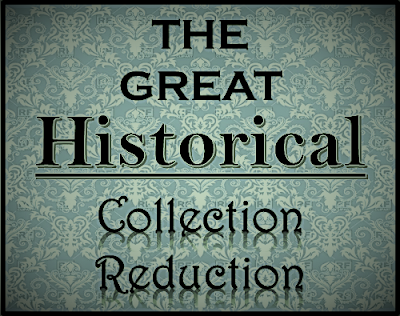 So, let's take a look at what's up for grabs. 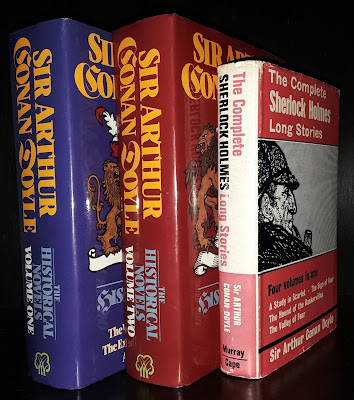 Here is a series of photos that give ideas about quality. The books aren't perfect. At best they'd be good reading copies, but they don't smell, and have no major problems like loose pages or insect damage. I'll put a word or two of explanation with some of the pictures.

The dust jacket of the Sherlockian (smaller) book has obvious wear. It isn't ripped or damaged in any way, but it has been used and slid between other books many, many times. As you can see in the above picture, the spine is faded. The book is clean on the inside. No writing or the like. 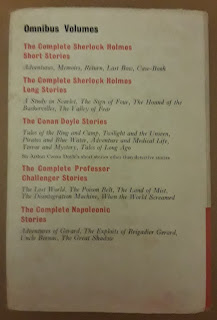 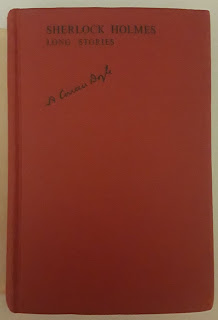 At some point the back bottom got wet, and the color bled some. The book has slight discoloration, but not too bad. The next two photos show the color bleed. 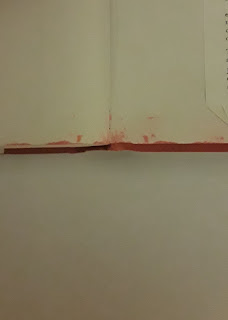 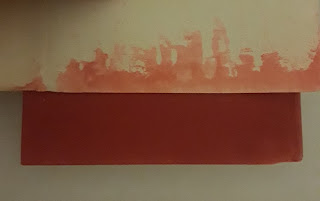 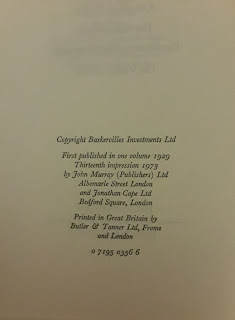 Now, about the two-volume set...
Whoever owned them made sure to notate who read what when. Both have these kinds of writing in them, but there is considerably less in Volume Two. 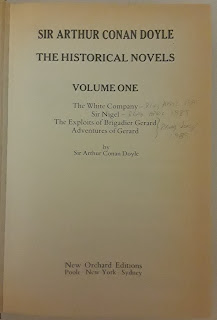 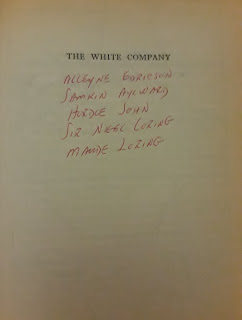 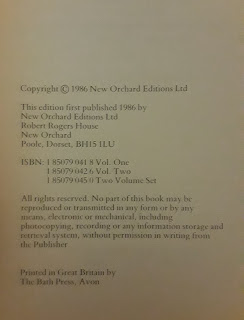 Each book has a review in it that appears to have been cut out of some magazine or book. They're stapled, but the staples have not stained the book pages. 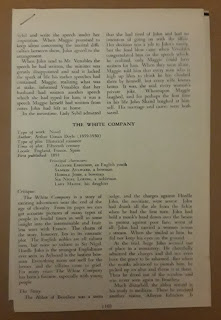 Each is embossed with this seal showing they are from the collection of Robert Burr - a noted Sherlockian from Ilinois. 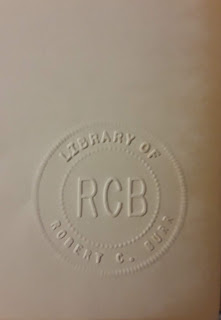 The two volume set has beautiful dust jackets. There are a couple of very minor corner bumps, but otherwise they are perfect. The books sat on a shelf near a window for far too long - there is yellowing of the page edges throughout them both. The books aren't damaged in any way, but the sunstaining is very evident. 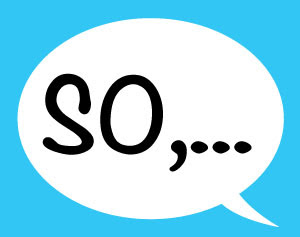 I know these aren't great finds, but remember that I don't collect for value. Price stickers, writing, folded corners (even though I don't do that), tape marks...all of these things show where a book has been. I love that kind of character. It's fun to try and deduce what those things mean.

If you have any questions, or need different pictures, just let me know. I'll be happy to respond muy rapido.

The trivia question this time is:
Name the two French artists Holmes mentions by name in The Canon - and name the stories.
(Remember to send me your answers on Messenger or by email at historicalsherlock@gmail.com.)

Correct answers are already coming in, so if you're interested get your in now. I charge no shipping, and I get them out soon after the 16th (the date of each drawing). I'll see you for the next blog post, and as always...thanks for reading.
Posted by Historical Sherlock at 5:02 PM No comments: