Why Isn't There A Definitive Chronology?

When I took up the challenge of trying to bring tranquility and peace to the chronology of The Canon I never realized that there was so much controversy and disagreement. I had only The Annotated Sherlock Holmes to work with, but knew from that publication that others had taken a swing at putting all of the stories in their own order. So, I began collecting every word I could on the matter. I have been able to put together a spreadsheet of almost two dozen different chronologies, and I can tell you that there is not a lot of agreement.

One of the timelines I always enjoyed reading was that of Sherlock Peoria's Brad Keefauver. Brad and I have spoken about the subject numerous times, and we've both mentioned the other in columns on the subject. The Keef was good enough to send me a listing of the stories that showed a breaking down of exactly what Watson gave us to work with. I am indebted to him for having done this as it keeps me from having to attempt it myself.

This blog was always about the Sherlockian chronology, but I struggled with trying to infuse my own thoughts and findings into Posts. As a result of lots of fretting over what to do with Historical Sherlock, I have decided to focus on the different chronologies that I have collected.

Below is a breakdown of the information that Brad gave to me. Once again, I love that this table exists. As much as I love this part of the hobby, I love even more when very detailed and in-depth work has already been done that I can access.

So, let me start off by asking if you know how many of the 60 original stories have a date that is absolutely unquestioned? A dozen? More? Less? Well, the answer is one. 'His Last Bow' (LAST) begins on August 2, 1914 - the start of World War 1. There are 5 others that are mostly agreed upon, but only one that is firm. (For the record the other stories are SPEC, FINA, GOLD, DEVI, and BLAN.)

The reason the other 50+ are not as certain is because of the amount of debatable, or conflicting, info that The Good Doctor records in The Canon. The are just as many "explanations" for the inconsistencies as there are the inconsistencies themselves - bad handwriting, typesetting errors, incomplete notes, outright misrepresentation of facts in order to protect someone, etc. When one is allowed to use any of these excuses to justify a date, you find a wide range of disagreement between two or more parties, and it keeps a definitive chronology from ever being devised. 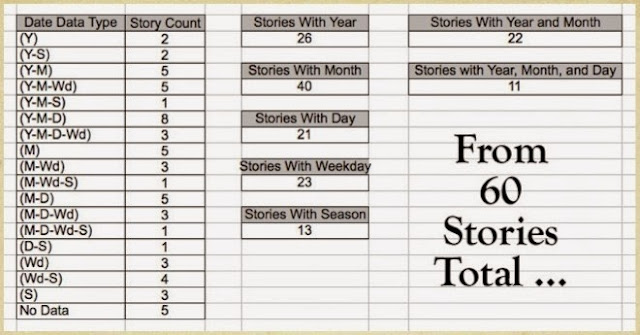 As you can see, there is at times very little to nothing to go on (five stories with no dating implications what-so-ever) to quite a bit of data (eight with the year, month, and day). Add to that the inconsistencies I listed above and you find a wall of problems.

This is what faces chronologists. Everyone who has written one feels pretty certain about theirs, but a few have realized mistakes and given it a second try. Others have admitted in their books that what they have come up with will undoubtedly be scrutinized by later Sherlockians and are aware that their findings may come under fire.

The debating of theories and end results is the best part of this whole endeavor. A close second is finding a clue that everyone else has missed and using it to come to a completely original conclusion.

If you wish to read Brad's chronology, check out Chronology Corner on the Sherlock Peoria website.
Posted by Historical Sherlock at 5:18 PM 1 comment: