"Where Do You Get Your Ideas?"

My sole purpose here at Historical Sherlock is to find ways to tie Holmes and Watson into the world we know them in. I am constantly on the lookout for anything that will help me with that goal. It consumes me when I'm not doing the usual everyday stuff like working or eating or playing with the grandkids. Whenever I go book shopping, or antiquing, or to flea markets or thrift stores, my primary focus is on finding something that will help bring Holmes and Watson a little closer to their world.

I don't actually collect ephemera anymore. It only tends to take up space for other things which might assist me in my quest. (Really, how many calabash pipes does one person need?) I understand collecting and the mania that goes with it, but what my office consists of almost completely are items (books, magazines, newsletters, pamphlets, diaries) to help me do this "job."

Recently, I was in Maryland and was taken to a used bookstore for my birthday. The place was huge, and I had to go back a second time. I spent hours in there mining through every shelf I thought might contain a nugget. Unfortunately, I could not remember exactly what books I had at home and what I didn't. Thus, I had to pass on a number of titles because they sounded too familiar. (No need having more than one of them, either.) When I returned home I went through my library and made a photographic record of all of the books I use for research. I was pleasantly surprised at some of the things I had, and then subsequently depressed that it wasn't more. Luckily, I'm going back to Maryland in November, and I'll be going back to get those titles I left behind.

I thought it might be interesting to share with you some of the titles I have. So, let's talk about what I have the most of: books about London. How can you not if you're going to do any scholarly work in this field? You don't know London, you don't know Holmes. 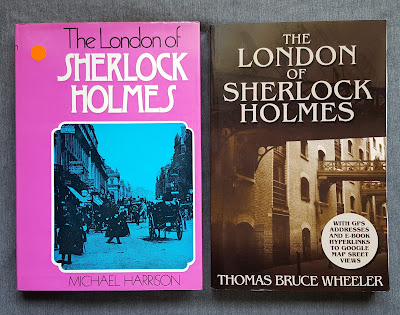 I actually have two books with the title of The London of Sherlock Holmes. (And there are probably more.) One is from the early 70's and was written by Michael Harrison, a giant in Sherlockian/Holmesian circles. The book has lots of nice crisp pictures and illustrations, and does the same thing I try and do here - show what Holmes and Watson would have seen. It talks about many of the places in and around London that are mentioned in The Canon. It's a fantastic work, and I have referenced it many times.
The other one is from 2011 and is the work of Thomas Bruce Wheeler. Thomas is a man who is passionate about mapping out Holmes's London, and has several books about it. He also has a website about his maps that is interactive. The level of detail and information in this is invaluable. I simply don't know how anything more can be written about it, but if anyone finds a way, it will be Mr. Wheeler. 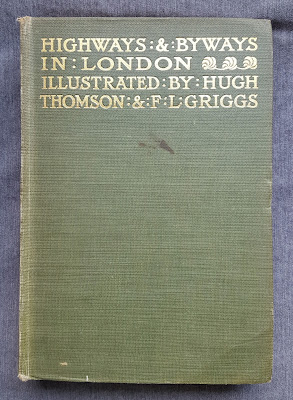 There are also ones about Victorian furniture, architecture, prisons, hospitals and sanitariums, crimes, art, famous people, PUNCH cartoons, and even one about the practice of tea drinking. I have ones about violins, beekeeping, hangmen, colleges and universities, cemeteries and graveyards, the smells in London at the time, and two books right here on my desk about Victorian literature and society. 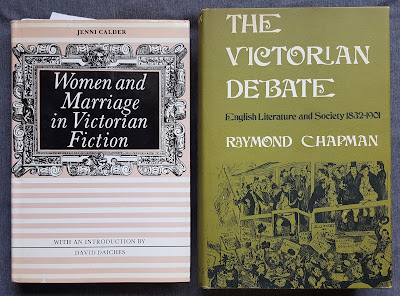 Sometime I pick up a book just to see if can give up one little something-or-other I can use in the future. I did just that at a library sale not long ago. The book is called Old Junk and is by someone named H. M. Tomlinson. It's basically a grouping of articles that last from January 1907 to April 1918 about this guy's walks around London and the things, people, and places he saw, met, and/or experienced. So far it hasn't given up anything, but it's a fun read nonetheless. I am anxious, though, to get to Chapter XII. (That's how they're numbered in the book.) That chapter is called 'The Lascar's Walking-Stick.' Hopefully it has something to use. (I'd like to point out that the book is a hand-numbered first edition, as well.) 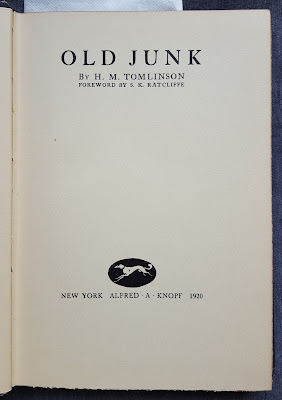 Now, so far all I've talked about is books. I also have newsletters from different Sherlockian orgainzations from around the globe. A good number of them are no longer being printed, or the clubs have folded, but it's still fun for me to grab a handful of them and just sit and read what my predecesors had to say. I'm no longer surprised to discover that someone else had an idea long ago that I thought was fresh and original. I now understand that dang near everything from The Canon has been covered. But, I do find myself a bit disappointed when I find that an idea of mine that deals with an extension or tangent from the stories has been tackled. For instance... 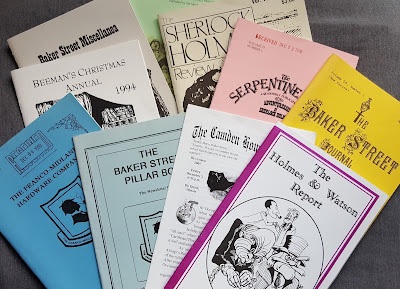 Last night I was thinking about what Holmes would have thought about the Shakespeare authorship question. (For the record, I don't care one way or the other who wrote his stuff, I just love the detective work that goes into the puzzle.) Well, this morning I was flipping through some old copies of Baker Street Miscellanea when I came across an article from 1990 by someone named R. F. Fleissner called 'Conan Doyle and the Shakespeare Authorship Mystery.' Luckily, it wasn't about Holmes and the question, but it was close enough. However, it's not a very long article, and it can certainly be expanded given all of the discoveries that have been made on the subject since then.

I also have magazines, pamphlets, and other one-off bits of scholarship to help me along. One thing I don't have, though, is old newspapers. I haven't gotten into that yet, but happily all of the ones I would want to read are available online in different archives. Believe me when I tell you that it is a very addictive thing to read through the same newspapers Holmes would have. I have spent literal days reading, making notes, copying and pasting, and scanning the columns for tidbits. I need to do more of it, but I also need two or three more of me just to have the time.

One of the other collection of books I have are those about Jack the Ripper. Now, for those of you who attended A Scintiallation of Scions in Maryland in June, you'll recall during my presentation that the subject of Holmes and JtR exhausts me. However, I don't have them because I'm interested in a solution to the murder. I have them because they are a perfect snapshot of the London police force at the time Holmes was in practice. Think about it - you get to learn about their procedures, ranks, uniforms, practices, routes, equipment. Everything. I think it's a goldmine, and I continue to collect them just for that purpose. Here are a few of mine... 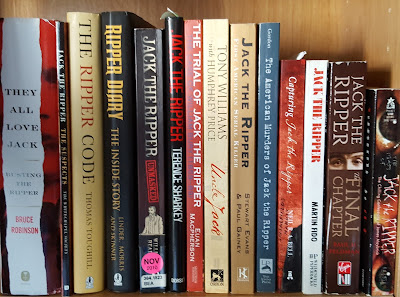 If I had to rely on just what I have in my office here for research I would be sunk. I am so glad that we have the internet for just such work. There is almost no limit to what can be found if you're willing to dig and dig for it. And since I don't think it's going away any time soon, I'll be here talking about Holmes, Watson, chronology, and Victorian London. As always, thanks for reading. See you next month.

(p.s. I know the Comments feature is still missing from the bottom here. It's a problem with Blogger. I didn't take it off intentionally. Hopefully it's something they'll fix soon. Please feel free to Message me on Facebook, or email me at historicalsherlock.com if you have something to add or say.)
Posted by Historical Sherlock at 6:50 PM